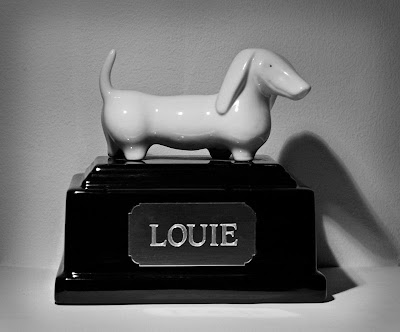 Eight years ago this week, a previous dachshund of ours passed away. His name was 'Louie.' He was a tweenie smooth black and tan, and lived to be about 14 years old. His congestive heart failure as a result of his heart murmur finally got the best of him, but he fought it like a champ the last year of his short life.
As we tend to say about the dogs in our life, there was never another dog like him. Louie was actually Louie the 3rd; he was the 3rd dachshund named Louie in our family name. Dad had a dachshund named Louie when he was a kid. I had a dachshund named Louie when I was a kid (among other dachshunds), and this Louie was intended to be my nephew's dog. Turns out he didn't get along with the neighborhood kids, and I adopted him at 4 years old, and he moved to Chicago with me.
Oh, the stories we could tell about Louie. We could talk about the time he killed a baby rabbit and brought it to my feet. He was so proud. Or the time he chased a cat at a gallery opening in Chicago and he mis-judged where the brick wall was, rolling and slamming into it in front of a hundred people who gasped in excitement....only to get up with all his pride as if to say "I meant to do that." Or the time he chased a rabbit under the rocks at Lake Michigan in freezing cold weather in Chicago. I didn't think I would see him again as there didn't seem to be any way out from under those giant boulders, but he eventually found his way out after about an hour, shaking horribly, and with blood on his chest from the rabbit chase.
But today we'll talk about the time he turned a bad situation into a good one, and made a young kid very happy.

A good friend of mine sent her 13 year old son to camp in Wisconsin. They’d been planning it for months, and he was really looking forward to it. Actually, he was a little nervous about the great outdoors having been raised in the city, but was willing to give it a try.
I got a call one morning from my friend that things weren’t working out at camp, and that her son wanted to come home, and she needed me to drive her up and pick him up. It was about a 2.5 hour drive away, so I brought Louie along for the ride.
We got there, and there was my friend's son, standing alone outside visibly upset. My friend got out of the car to talk to him to see what was going on – turns out he was the only African American at the camp, and all the other boys had been relentlessly picking on him and calling him names for days. He couldn’t stop shaking and crying.
My friend isn’t one to let something like this go without having her say, and her son stayed outside while she went in to the office, and I’m quite sure, floored the camp counselors with a verbal assault that they’ll never forget until their dying day.
So, we got into the car to head back to Chicago. Happy Louie was in the backseat, smiling, tail wagging. Her son really didn’t want anything to do with Louie; he was still upset, and he hadn’t been raised around dogs, so he wasn't sure of what to make of him. Louie didn’t give up that easily though. He kept trying to inch closer and closer to her son. Finally a hand came out to pet him. The crying stopped.
We stopped at some little burger shack to get some food to go, her son hadn’t eaten all day. Of course Louie is going crazy with all of this food in the car, and some new people to trick into getting some handouts. From the back seat: “Can I give him a French fry?” Sure, just give him small pieces though, he doesn’t need a whole French fry. Snort. “OW! HE BIT ME!” He didn’t mean to, just be careful when you feed him. Snort. “OW! HE BIT ME AGAIN!” Watch your fingers and be careful when you feed him. Time it real careful, and let go of it as he tries to get it from you, and he’ll catch it in the air. “HE’S LIKE A SHARK! THAT'S SO FUNNY! HE’S LOUIE THE SHARK! MOM! (laugh laugh giggle giggle) LOOK! LOOK HOW HE JUMPS AND BITES AT THE SAME TIME! COME HERE YOU LITTLE SHARK!” Snort. Snort. “OW! HE BIT ME AGAIN! LOUIE THE SHARK!” (laugh laugh giggle giggle laugh giggle).
An hour passed, french fries are long depleted, and her son is asleep in the back seat with Louie sleeping in his arms. It was amazing to see how quickly little Louie was able to turn around a really bad situation. That 2.5 hour drive back to the city could’ve seemed like 25 hours had it not been for him. My friend and I talked about that wonderful shark in the back seat for many years. 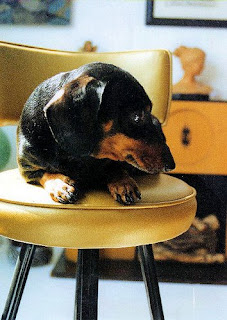 Top photo details: Louie rests comfortably in the urn I found on the net. I already had the white dachshund figurine I'd picked up from an antique shop in Amsterdam, and affixed it to the top of the urn. I love the slight smile on the figurine.

What a great way to remember Louie.
He may be gone physically but his spirit lives on strong in the hearts of the people he touched.
Love Ruby

That's a great story on so many levels.

Louie was a special little doxie. Thank you for sharing that story.

What a wonderful story! Thank you so much for sharing it. We're pretty sure Louie's spirit lives on.

Thanks for that story. Louie sounds like he was just wonderful. We wish we could have wrestled with him.

The story made my day. Dachshunds can be so comforting; the kind eyes, the paw offered in friendship..