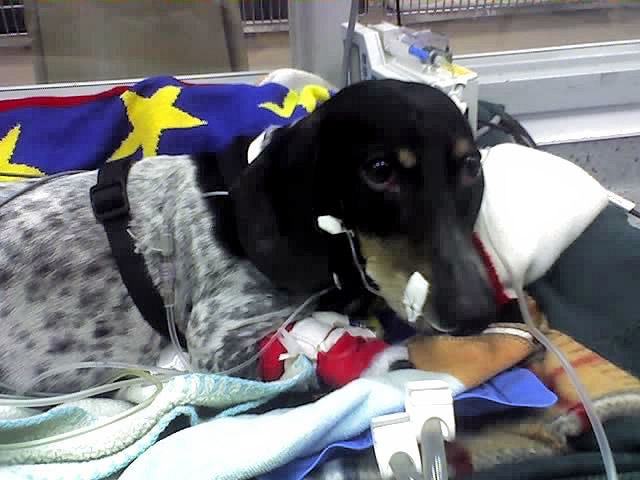 We wish we had better news to report about your 'Long and Short of it All' host Joey - everything was going so well with his surgery and then postoperatively, all things considered, but later this morning he was throwing up, and the thing that we didn't want to happen during recovery has happened - he threw a blood clot which has lodged itself in his lungs - a pulmonary embolism.  The internal medicine vet suggested that we visit him as soon as possible, and we were out the door and at his side in record time (we were planning on a visit a few hours later).  At this point, the clot may dissolve and he'll get better, or it may build up and he'll get worse. His breathing is labored.
He seemed very happy to see Dad and one of his good friends.   He didn't wag his tail, but he perked up and enjoyed being talked to and stroked and massaged and kissed on.   We told him that great things await his return home:  car rides, walks in the park, laps, all his favorite food and treats, and that Maggie is lonely without him.  We told him about all the love and support that his friends from all over the world are sending him.
Heading back out to visit him again tonight.  He'll be able to eat tonight for the first time, and hopefully we'll be able to get some food down him, but when he was on a fentanyl patch before for back pain several years ago, he refused to eat, and we don't think he'll want to eat tonight with his fentanyl IV.  But we're hoping.  The vet tech did take him outside for a while about an hour ago.  He enjoyed basking in the sun with her - like most Dachshunds, his most favorite thing to do in all the world. 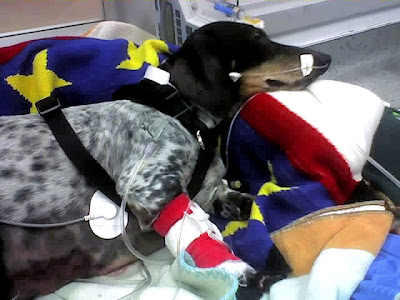 Oh no! I'm so sorry to hear about this. I hope that Joey pulls through as he sounds like a tough little dude (as all doxies are).

Hugs to you all.

Awwww. We are so sorry to hear this. He is in our thoughts and prayers.
~Maggie, Milly, and Shelby

Joey, little man, you hang in there. We're thinking hard about you.
Love Ruby & Penny

*wishing hard for a good outcome*

I told my Bertie Woofster, and he sez: 'Woo-er-WARK!' I take this to mean, 'Hang in there, Joey.'

Joey, you and your family are in our prayers here in SC! Dad and Maggie hang in there!

oh sweet boy. all the warmest of hugs for you tonight. :)

Sending positive thoughts and prayers to Joey and family - may things improve bit by bit so he's back home soon.

So sorry to hear about this set back. Joey, we are adding extra prayers right now for you. Joey's Dad, extra prayers for you too! Hang in Joey! Please get better.

Oh, poor Joey! We will be praying extra hard for you and your family. *big healing hugs*

My heart goes out to you with the warmest of wishes

What a handsome dude you are, even when you don't feel up to snuff! Hang in there, Sweetie! You've got lots of rooters rooting for you. Nose kisses to you! Sleep well tonight.

Fern the sausage princess from Montreal and her humans are sending positive thoughts and prayers. xoxoxo

praying for this pup...give him an extra hug for me!

Prayers continue for Joey and all of you. What a tough little man - May God Bless his sweet soul. With love and hopeful prayers, Jayne D. and Annie Belle

JOEY! Please get well really, really soon. I have just discovered your wonderful blog and you are such a delightful host. What a darling boy you are...
Love and kisses for you, Darling!!

Hang in there, Joey!

Hang in there Joey!!!! LEa sends recovery kisses:* and we both await good news we know are coming;) Dad and Maggie we have u in our thoughts aswell...

Dear Joey
Be brave and strong - you can do this !
all our love to you and Maggie and Dad
from Kerry and the hounds - Beanie, Chloe, Gracie and Poppy

Joey, be strong! n do keep us updated. Thanks n take care!

You can do this Joey! I'm going to pray extra hard for you tonight. I send you and your family all the love and support in the world! Joey, baby, get better! <3

PS Still crossing paws for you.

PSSS Our first comment didn't get through, but our PS one did.

We told Joey to do everything the humans told him to do. Maybe Joey is up on the other end editing comments??*

Take care guys. Will check in with you later.

She's the only one with 'guts' around here to call a spade a spade. (human error)

You are all in our prayers. To the bravest dachshund, Joey, hang in there.

So sorry that you're all going through this but stay strong and fight fight fight!

Sorry to hear about this bump in the road. You've already come so far! We're thinking of you and sending our best vibes your way.
And Joey's family - parents and Maggie - hang in there.

Joey, you are very strong, so just concentrate on getting better and the people around you will do their best to help you. Besides, with the love of Maggie and Dad, you can do anything!!! Rest up and get healthy.

Our prayers are with y'all.

Oh Carson, Joey, and Maggie we love you all so. Thank you for taking the time to share this news with us. We are sending such strong energy and prayers to you all. Melinda and Jeeves

Joey, you can get through this. We are all woofing for you and sending all our good energy your way. Dad and Maggie hang in there, Joey will make it home.

Zeppelin, Bruno and Olga send nonstop love and wishes for a strong recovery, and relief for Dad and sis Maggie who are so concerned. Their mom could also not possibly care about you more, my friends. CV

Hang in there Joey, Dad and Fam! Luckily most dachsies are toughest more stubborn little people you will meet. The picture looks like he drawing strength from your eyes. What a sweet boy. Hope everything goes ok, keep us posted!

Ah, sweet Joey, we all hope this is just a hiccup and that you will pull through and be just fine.

Friends everywhere have you in our hearts, Joey. Get well. (hugs)

Get well soon Joey!!!
Your Dad and Maggie need you, not to speak of us, all of your fans :)
I hope you have a quick recover ;)
Kisses from Portugal

Our thoughts and prayers are with you, Joey! Hang in there and best wishes to feel better soon. All of your fans love you and are sending positive thoughts.

To Dad Carson. Our hearts go out to you during this most stressful time. We know how much Joey Baby means to you and Maggie. We are praying a special prayer for you. Keep your spirits up and know that everybody from all over feels for you and understands your anxiety. God bless you for your unwavering love for your pups. Please keep us posted as we are all waiting for news on Joey today. Your 4 fur friends and mom from Quebec Canada.

Hang in there buddy there will be an abudance of treats for you when you get home. My two little weenies are sending all their love, kisses and barks.

Joey has the sweetest eyes I've ever seen. If love can make Joey better, Carson, Joey has it made. Hang in there.

I don't even know you, Joey, but if tears could make you well, you would be enjoying walks in the park today. I am praying for, little guy.

Don't worry, Joey'll be fine - we promised to share our treats with him, and we don't do that for anybody, so Joey has no option but to collect on our offer.

Joey,
My Mom and I are anxiously awaiting an update from your Dad. Be strong Joey.

Ohhh, sending all my positive vibes to Joey. That look into daddy's eyes just broke my heart.

Sending lots of love and prayers to Joey, to Maggie and Dad also! From LInda, Frankie and Maggie

oh that picture of him hooked to all those tubes!! xoxox little guy!!