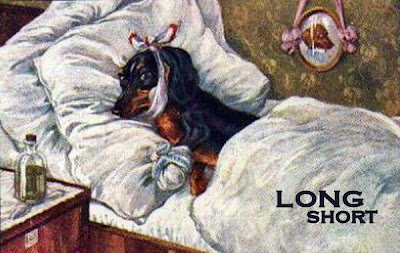 Yesterday was an exciting day in the recovery of your 'Long and Short of it All' host 'Joey,' and his continued recovery following his bilateral adrenalectomy and the complications which ensued.  Dad went back to work because he's gotta pay that vet bill, when he received a call about 11 AM that Joey is ready to go home!  So, it was a day earlier than expected, and off to the veterinary emergency center we went.
It was exciting to bring him home and let him see his littermate sister 'Maggie' again, and do you think she was excited?  Not so much.  A couple of sniffs, and a few tail wags; she was more excited to see her Dad walk through the door honestly.  Joey gave her a few good sniffs as well.  We had planned on capturing the big reunion on video, but couldn't find the camera at the moment, and thank goodness we didn't, cause it was a real snoozer.
Joey settled in well, and went straight for the rug in the kitchen next to the door with the sun blaring in so he could take a much-needed sun bath.  "Aaaaaahh," he most certainly thought.  He rested there for about an hour.
Meanwhile, Dad started thawing some chicken breasts, cooked them up, and added some rice.  The vet said that he could start back on his raw food upon discharge, but we decided to keep his food bland with the cooked chicken and rice.  Dad offered Joey his evening metronidazole for his diarrhea issues in a small hunk of nice organic swiss cheese, only to have Joey turn up his nose at his favorite dairy delight.  And so he was pilled.  He did eat about 1/4 cup of the chicken and rice though, and was drinking well.
Afterwards, he had some lap time at the computer while Dad stroked him and read him all his most recent comments and emails.  He enjoyed this immensely, and was happy and content to be home.  He did surprisingly well at bedtime, and just sort of knew that he wasn't allowed to sleep in the big bed tonight; both he and Maggie were to sleep on their own bed in the bedroom - don't want to risk him sleeping funny next to Dad, and then having issues with his incision, or for some reason deciding to jump off the bed without using the stairs, which could also damage his incision.
Sleeping was peaceful until about 4 AM when Joey vomited three times.  And so, after a telephone consult with the veterinary hospital where he was, it was off to a closer emergency vet for some supportive care.  He will have bloodwork drawn, and he will be started on an IV again to get him some fluids.  Dad will transfer him to his regular vet at 9 AM to be monitored while Dad is at work.
Hopefully this is just a bump in the road on his continued recovery.  It was so nice to have him home for a while though.  Expecting that he can come home again tonight.
Posted by Rowdy and Bette at 7:32 AM

Hi Joey, sorry about the minor set back. But, sounds like the right thing to do for a bit of monitoring at the vet just in case. Will keep those prayers going for you and your Dad. Hopefully, you'll be home again very soon.

Lets hope it was just all the excitement of leaving the hospital and being home. Joey get better, we are all worried about ya. your fur friends from Quebec Canada

A leap forward, a step backward. We're sure that this was just a minor complication and that you will be back in that sunbeam very soon.

Anyone who's had major surgery can tell you that a bumpless post-op road is as rare as a Chicago summer without construction delays. Hang in there, Joey and Carson. And show a little team spirit there, Maggie.

Oh Maggie you are such a diva sister. Joey must have been so excited and relaxed at the same time. Different food et al, it takes time. For the caregiver, I always thought the real work started when there were no nurses and docs watching my loved ones and I had to do the care taking!
So Carson, hang in there, one day at a time, one bump or hiccup at a time.
Joey Joey Joey baby, take your time, home is always there for you. Maggie dear, we know you are trying to be the super strong one, saying "oh, I knew he'd be back..." Maybe give an extra wiggle when Joey comes home the next time? For Dad? For photo ops? For us out here who are wiggling in anticipation?
Keep up posted, Carson, and thank you for sharing this process with us. I think it will help many others when their little ones are having major medical issues. You are a really great writer--someone should give that man a book contract!
Love, Melinda and Jeeves

Sorry you're having a little set back Joey. Hopefully you'll be back at home tonight. When you're feeling better get your Dad to read the note Lego left for you on our blog a few days ago. Some nice folks left comments for you as well.

The recuperation process always seems like one step forward and two steps back, but stay positive by focusing on all the accomplishments that you have made in the last week, Joey. Consider this setback as a minor glitch in your healing. Sawyer, Abby, and I are continuing our prayers for you.

Guess you can see where my politics lie there. OOPSY.

Hang in there Joey and Dad!!

I'm sure this might have already been checked but just in case I would make sure that Joey isn't having a reaction to his metronidazole. After being on it for a few days some dogs develop side effects.

Good luck and hugs and kisses to Joey!

Dogs are so finicky with reunions! Our wiener is VERY attached to us, so when we went away for 4 days and left him with family, we were expecting a huge rush of excitement when we arrived home. Nope- just a few tail wags and sniffs, then off to play with his toys!
Can't wait to hear about Joey's 2nd homecoming! Tail wags and wet kisses sent your way, Joey!

This is just a little bump in the road, Joey! Keep on truckin' and things will get better...we will continue to send thoughts and prayers your way!

Awww, here's hoping Joey will be back tonight!

Bertie Woofster, ignoring the high-falutin' origins of his name, made a bunch of Curly-noises when I told him. Perhaps he's saying, 'Hey Joey, it's just a poke in the eye, you'll be better in no time!'

Joey, we're so happy that you got to go home yesterday. Hope you get home again today.
Love Ruby & Penny

always good to get home and your own bed. just a little hiccup. schnitzel; winnie; wilbur and i still sending good thoughts your way joey. keep that tail wagging.

HANG IN JOEY!!!! You can DO IT!!!!!! Also, a hang in to DAD. Glad he was home for a bit and will be back there shortly. sending lots of doxie "snoring" (cause that's what happening over here, but we are still sending love and well wishes) and prayers from Roxie Lou, Coco Beane and Auntie Annie Em.

Hang in there, Joey and Dad! We hope you get to come back home tonight. Sending love and prayers to you all.

We are hoping and praying that Joey's recovery continues, even if it takes a little longer for him to get home. Better to take it slowly. Hope he is feeling much better today!! We are keeping you all in our prayers. Love, Jayne D. and Annie Belle

Taco and I will keep our digits crossed for a good report in the morning. We love you all.

Oh Joey, so sorry for the minor hiccup! You can do it, buddy! We're sending you lots of sunshiney love from Montreal! Keep your chin up, Carson! We're rooting for you all! Extra scratches for Mags, too! Love, Princess Fern and her humans and even the evil cat Rex

take ur time to recover just as long as u do. :)

Joey, this is my first visit to you here (I was sent by Twix), but I feel compelled to wish you a speedy recovery! Clearly your humans love you very much, and I hope all these little hiccups are just that. My girls (Arwen and Nyxie) send their love as well...big doggie kisses! now "following" you, by the way...

hey Joey! must be sweet to be back home?:) sorry abou the bump on tghe road, it will get beter, we're keeping our paws crossed!:)
keep up the good recovery!!!
some more kisses from Lea!:*

We came from Twix's bloggy and wanted to send some healing vibes to little Joey on his road to recovery.

Joey, I hope as the new day dawns you are feeling better. Please stop vomiting so you can be home with Daddy and Maggie enjoying your sunbaking.

We love you all the way over here in Sydney, Australia and we're saying lots of Dachshund prays for you.

Little dude! Twix sent me over to check on you and I am so worried. You have been through a lot. I am keeping my paws crossed for you.

We're very happy to hear Joey was able to go home! We hope this is just a bump in the road too and will continue to pray for a continued recovery! Feel better Joey! lots of love and tail wags!

We will have to read more to see what happened to Joey, but we wanted to come say hi and wish Joey well after our furiend Twix told us about him. We hope this is just a bump in the road and that Joey is doing much better soon.

Twix told us about Joey - I will take some time and read back through the posts. Hang in there Joey and we have our paws crossed for you furfriend and we send our prayers to your mommy too!