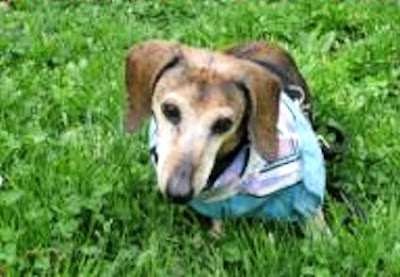 With the recent passing of 'Chanel,' the Dachshund mix who was on record as the oldest dog in the world, dogs are coming out of the woodwork to claim the esteemed title, and it's amazing how many of them carry a Dachshund gene or two.
Meet 'Paco Sosa Fetes,' a handsome red smooth who hails from Manahattan, and is believed to be the oldest dog in New York. Paco turns 20 years old tomorrow, September 5th. May bones rain from the sky! Excerpt from Reuters:

Paco exercises regularly and eats organic poultry, fish and fruit; and in good
weather he can be seen in Central Park with his human companion, filmmaker and
venture capitalist Bernadine Santistevan. But Paco's healthy regimen isn't
the only factor in his longevity, according to Dr. Talia Goldberg of Park East
Animal Hospital, where Paco has been treated since 1990.
"A lot of it has to do with the care that Bernadine provides him.
Acupuncture, physical therapy, Eastern therapy -- she goes well beyond for
him." Thanks in large part to this comprehensive wellness program and to
Bernadine being "in tune" with her dog, "Paco is still with us and in pretty
good condition," said the New York veterinarian.

Read all about Paco in a great article at Reuters. 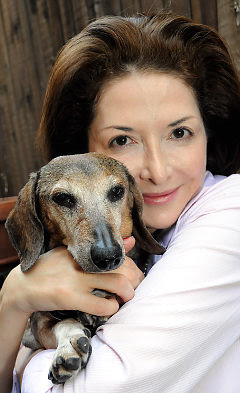 UPDATE: 9.6 - 7 AM: Meet Paco's human, Bernadine Santistevan, in an expanded article at the New York Daily News.
Posted by Rowdy and Bette at 8:30 AM

Traditional Chinese veterinary Medicine is the best! My pups have benefited greatly from it!!

My dachsie, now 13, has been on a "real food"(poultry, fish, veggies and fruit) diet most of her life. She has also benefited from acupuncture and holistic as well as traditional veterinary care. She still enjoys her daily walks, and even a frisk or two. I'm a believer!