Dachshunds in the News: New Device Helps Save Dachshund 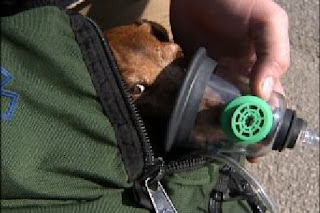 Hopefully Rooney will have a quick recovery!
Excerpt from 'Action News 36' in Lexington, Kentucky. By Chris Dietz.
A recent addition to the Lexington Fire Department is being credited with saving the life of a dog. Rooney, an 8 to 10 year-old, tan dachshund was pulled from his home on Mc Connell Trace Blvd. early Wednesday morning suffering from carbon monoxide poisoning. A new plastic nose cup recently donated by the Lexington Kennel Club helped firefighters give Rooney badly needed oxygen.

Rooney was taken to Kesmarc in Versailles where he was treated in the facility’s hyperbaric chamber for small animals. Dr. Mindy Johnson tells Action News 36, the initial treatment of oxygen Rooney received with the special dog nose cup was essential to his recovery. Rooney will receive another hyperbaric treatment Wednesday night and a third one Thursday morning, but Dr. Johnson says the dachshund should make a full recovery.
Posted by Rowdy and Bette at 7:05 AM