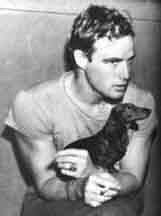 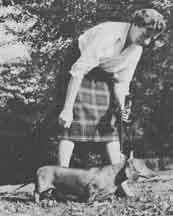 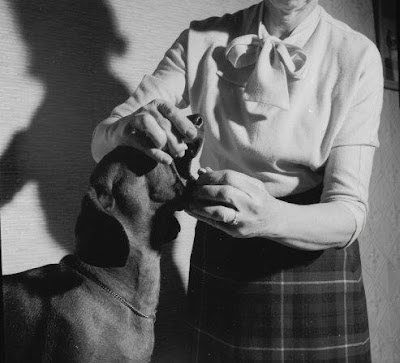 Famous Dachshund Owners? Look closer. Everyone knows that the part of 'Toto' in The Wizard of Oz was supposed to be a Dachshund. Brando owned a doxie named 'Maria.'

But it's the same photo-shopped doxie in both photos.  Fake, fake fake.
And that's not Margaret Hamilton who played the wicked witch, who owned the Dachshund that was supposed to be Toto, that's a woman from a vintage doxie 'how-to' pamphlet, posted just a few posts below demonstrating how to give your doxie his medicine.
This website seems to be the source of such legends and conundrums: http://home.pacbell.net/jcreitz/Andouille_Dachshund_Page4.html

UPDATE July, 2010:  Years later we learned that Brando's Grandmother was a Dachshund Lover.  See the beautiful real photos.
Posted by Rowdy and Bette at 9:06 PM

But, but...but...Rats. Really? The Brando pic is ridiculous, but I bought the Wizard of Oz story hook line and sinker. Totally disproven?

We believed it for YEARS until we looked at the pics close.

I'm sorry you believed them, but as the author of the web site from whence they came, and the guy who photoshopped the pictures, I have to remind you that every one of the Andouille Dachshund pages had a disclaimer at the bottom stating that the facts were fictional and the photos were doctored. Caveat emptor - it's not like we were hiding anything.