Stop the Earth, It's Going Too Fast 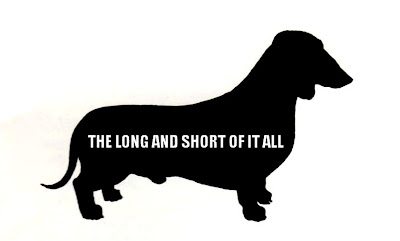 Once upon a time, when the Earth was young and still whelpishly frisky, began Uncle Peterfritz, giving his nephew Rufus a quelling lift of the upper lip, it used to get around the sun in considerably fewer hours than it does today.
This had advantages, such as short waits between meals.
But if you take paws to reflect, you'll see there were plenty of disadvantages, too.
Life isn't only gravy, Nephew, and it's disturbing to be routed from one's bed before one has so much as walked all the wrinkles out.
In those days the saving types couldn't find a minute to bury their bones, and a fastidious Dachshund hadn't time to select just the right tree, but was forced to use the first one he found - and be nippy about that too, before it got away.
Believe me, such rush-rush-rush can be a strain! A dog had to be on his toes every second, and there was no such thing as a relaxed ear. All dogs, including us Hounds, had ears that stood straight up from their heads, stiff as if they'd been starched - from pure nerves! Even now, some of us haven't recovered entirely: Beagles still travel twice as fast as necessary; and Whippets - poor things - I'm afraid they'll never get their hind legs back to normal.

Nobody knew how to slow down that silly young world. It probably would still be racing around at the same pace if it hadn't been for an equally silly young Dachshund.
This pup, whom we'll call Rufus - the same name as yours - had more curiosity than sense. And he didn't complain about the speed of things. He could take in food faster than a vacuum cleaner inhales dust, so mealtimes couldn't come too fast for him. He could fall asleep anywhere, at any time and in any position. And, since he wasn't yet curbed, he never bothered to look for a tree, but squatted wherever he was, the mannerless whelp!
Well, one morning this Rufus flew out of the house as usual, without even wiping the egg off his eyebrows, and tore down to the lower garden to investigate a burrow he'd noticed the night before. It had looked dark and interesting, and sure enough! when he poked his muzzle in he saw a wiggle of movement away back there in the dark, and caught a whiff of what was neither cat, dog, rabbit, nor anything he'd ever smelled before.
What could it be? He simply had to find out. Since he was too fat to get into the burrow, he set about enlarging it at once. How the dirt flew! He dug and dug; lunchtime came and went; but the farther in Rufus got, the farther back went Whatever It Was That Lived There.

Did I say Rufus hadn't too much sense? Well, every Dachshund ought to know that if you reach up and take the bottom out of something, the top is likely to come down on your head - which is exactly what those rocks did when Rufus excavated the dirt that was holding them up. Down they came, crash bang! And although instinct made Rufus jump back in time to escape the worst of the slide, the tips of both his big stiff ears got pinned back between two boulders.
What a predicament! It wasn't helped any by the owner of the original burrow, who resented having his roof brought down by a nosey pup.
Poor Rufus! For a while there he thought he was a gone dog but good! He didn't know what to do.
When he could breathe again he tried howling for help, but all the other dogs were so busy racing to keep up with the world they couldn't stop to listen. He couldn't dig himself free, because the rocks that held his tall ears were far above his paws.
But OUT he had to get, no question about that. Painful as it was, he would have to pull his ears free by main force. So, gritting his teeth, Rufus braced himself against the ground and started pulling backward.
My Dog! how he pulled! He didn't stop for a moment, even to feel sorry for himself. All night long he pulled and jerked and tugged and backed, and the rosy dawn, shining later than usual into other Dachshunds' sleepy eyes, found him still tugging away.
Now it so happened that Rufus was heading East when the rocks fell on him, and it's Eastward that the Earth turns, Nephew. So when Rufus started backing up, he was actually pulling away from where the Earth wanted to go, exactly as a determined dog braces himself against the direction his Man intends taking.
Now, while no dog (that I know of), not even a Dachshund, can make a stubborn Man actually reverse himself, he certainly can slow him down - which, my dear Nephew, is precisely what Rufus did!
As the earth rolled East, Rufus backed West, and the harder the Earth pulled, the harder Rufus tugged. And whenever Rufus thought of being stuck in that hole for another night, he'd give such a strong and desperate tug that it came close to stopping the Earth in its tracks, and it even jarred California. As it was, the puzzled Earth had already been slowed down considerably - and no wonder, with a Dachshund fighting it every inch of the way!

Meanwhile, the other dogs had noticed how much longer time was, and though meals were now coming slower, which wasn't too good, the dogs had a lot more leisure for attending to other things, such as long sleeps in the sun, and socializing, and naps, and insulting cats, which was very pleasant indeed. All in all, they much preferred the slower pace. The Bassets had never been so happy! But it wasn't until the dogs had time to discover that Rufus was missing, and set out to search for him, that they discovered who their benefactor was. They found him just as he gave that final Earth-shaking tug that freed his ears, which now hung limp and long from their ordeal; and when they realized what he'd done for Dogdom, what a celebration there was!
And when it was over, and Rufus lay asleep surrounded by all the soup bones he'd been awarded, a conference was called at which it was decided that whenever the Earth showed signs of speeding up, they would, to a Hound, pin their ears to the ground and start pulling back, until it had slowed down again.
Which his why, Nephew, this world now runs at its present reasonable rate, allowing plenty of time for dozing and barking at mailmen, although meals are a bit too far apart; but then, nothing is ever perfect.
It is also why all Hounds have long, limp ears; and why a Dachshund can make himself immovable if a circumstance warrants it - it is one of his gifts as a World-Stopper.
And Dachshunds who dig - well, they're the ones who want to find that strange Wiggle and Smell that Rufus told about. No, he never tried it again. He'd lost a lot of his curiosity. Once was enough for him....as it will doubtless be for you, too, if you should ever get close enough to It to see the white of its stripe.
Yes, it's got one. No, I will not take you looking for it! It's too hard on my pads.
Posted by Rowdy and Bette at 9:07 AM

What a great story, thanks for making my day!!!