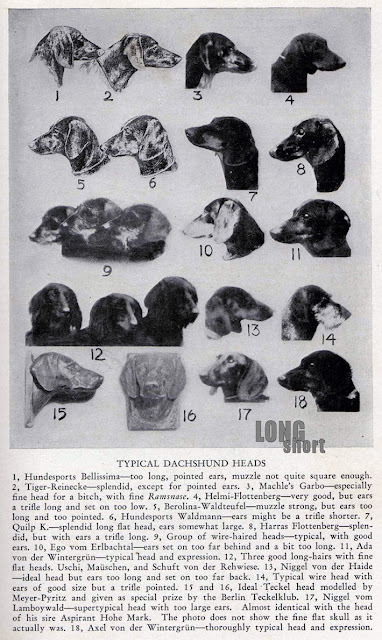 The slope of the skull line to the bridge of the nose and the insertion of the cartilage should be ideally so flat that a ruler might be laid on it, and from the insertion of the nasal cartilage there should be ideally a short slope downwards producing a Roman nose (so-called Ramsnase). There should be no furrow on the bridge of the nose or on the skull. The skull should only be only slightly arched, that is, it should be a so-called flat skull, with the occipital bone somewhat prominent. The lips should not be too heavy, since they would offer an easy target for the enemy.

Huh? This great old image is from The Dachshund or Teckel by Herbert Sanborn, 1937. Click on the image to read which heads were true to the breed standard at the time.

Good thing that Greta and Dewey's lips aren't too heavy! What a relief! I love the absurdity of these old dog manuals. They're always good for a laugh :-)

Your friends,
The Rebound Hounds

I've got a 12, a 10 and a 7. Fun to know that they're all "typical!" I always thought my number 12 had a broader nose bridge than she should, but this proves otherwise. Thanks for your visit to my blog, by the way. My dachshunds are my very favorite things in the whole world!