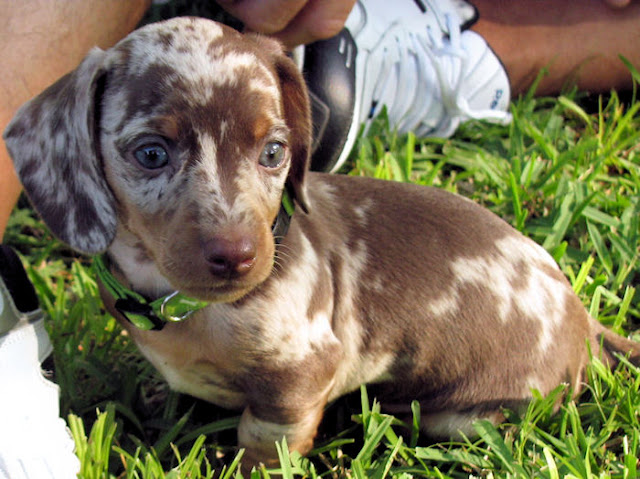 Deacon
Back in April of 2010, we helped celebrate a special Dachshund's first birthday.  His name was 'Samson,' and his mom, S. Kate Fletcher, had sent us in some of the most stunning Dachshund photos we had ever seen.  We were devastated to find out that Samson left this planet just a few months later.
But it's a new year, and we couldn't be happier to report that a new Dachshund is with the family now, and boy is he a looker!  It's 'Deacon!'  His mom writes:

June 5th, 2011 will be difficult. A year ago on that day, as you previously reported, I lost my dear Samson in a terrible accident. He was only a year old, but was oh-so-smart! He was only one test away from obtaining his therapy dog certification and I mourned his lost, not only for myself, but for all the children who would miss out on time with such a special fella. As the one year mark of Samson's absence from my life approaches, I find cause to celebrate.
Recently, a new little doxie has placed his tiny paws on my heart. Meet Deacon-- a chocolate and tan, patchwork dapple dachshund! Like his brother before him, Deacon is destined for therapy work at Arkansas Children's Hospital.
This is a message of hope for everyone out there who has ever lost their best, little, Dachshund friend. I may never have my Sam again, but I do get the honor of loving Deacon now. It is like comparing apples to oranges-- but lucky for me, I love all kinds of fruit! 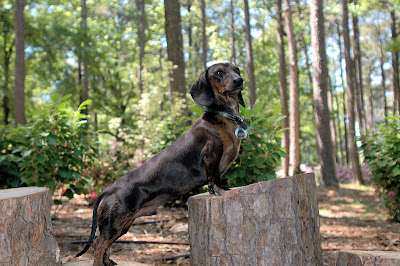 Samson
Related:  Those Special Dachshunds: Happy Birthday Samson!
Related:  Sir Samson the Stout
Samson may be gone, but he will never be forgotten.

You've got big paws to fill, Deacon, but we're sure you'll brighten hundreds of children's lives.  Go Deacon!
Posted by Rowdy and Bette at 8:48 AM

Sending love to the memory of Samson and congrats on that lovely blue-eyed puppy!

so sad about Samson...hopefully that deacon will surely fill the void..what a cutie!

Congratulations on opening your heart to another dachshund! Your analogy to fruit is so perfect. I am amazed at how much Deacon looks like my Sawyer did when he was a puppy. The only exception is that Sawyer's ears stuck out more. In fact, my friend diagnosed Sawyer with "sticky-outy" ears to which I retorted that Sawyer may have the ears of Prince Charles, but he has the face of Prince William. Sawyer may not win Westminster, but he sure won my heart! Celebrate every day that you have with your adorable Deacon.