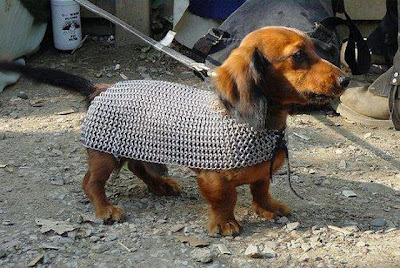 Thanks to our pal 'Sasha' and her human Allen in Monterey, California for sending in the link and description:
In the ancient and medieval worlds, before firearms became prevalent, armies employed dogs to strike fear into the hearts of their foes. The ancient Romans had whole companies comprised of vicious dogs, which were often starved before battle and equipped with knife-covered collars and anklets. And according to The New Dog Encyclopedia, “During the Middle Ages, dogs were armored as completely as the knights and their charging horses. Suits of canine armor — plate, chain and canvas — were worn into battle and for the chase.” We’re guessing none were as cute as this guy, though.  Via geekosystem.
This photo and link sure made the rounds on the internet machine on Friday; some sites even referring to it as one of the top 10 reasons the world was going to end on Saturday.  Well we're all still here.
Posted by Rowdy and Bette at 7:50 AM

woooooty. me so needs that for my cupid's warrior outfit. though i am not sure what it would mean for my wings. maybe i could use it as a shield! - b

We just blew up the cute meter!!!