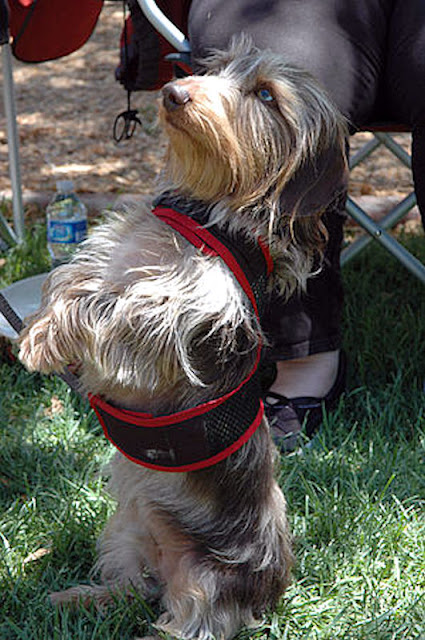 Hey, it's Wirehair Wednesday, and this is stunning 2-year-old 'Fritz,'
whose human is Pam Carson of Temecula, California
The season sure is heating up for Dachshund events.  The Temecula Valley Dachshund Club held its second annual Wine Country Wiener Fest on Sunday at Longshadow Ranch in Temecula, California.  The event included family-friendly games, local vendors, raffles, silent auctions, wine tasting, and "Dexter's Derby" Dachshund Races w/Kentucky Derby-style Extravagant Hat Contest.  Excerpt from inlandsocal:
There were prizes for contests that included the longest dachshund, which came in at 42" and the best kisser, canine, of course.
Riverside's Sunny Oasis Dachshund Rescue and Friends brought six rescued dachshunds, all of which found new homes. In addition the TVDC named Sunny Oasis as a recipient of the fundraiser proceeds as well as Almost Home Dachshund Rescue.
Swift running doxies competed in several heats and categories, including puppies and mixed breed dogs.
See a few more photos at inlandsocal. 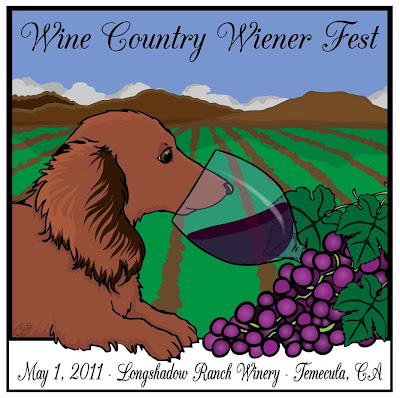 And I see she is properly dressed in a Hug-A-Dog Harness!