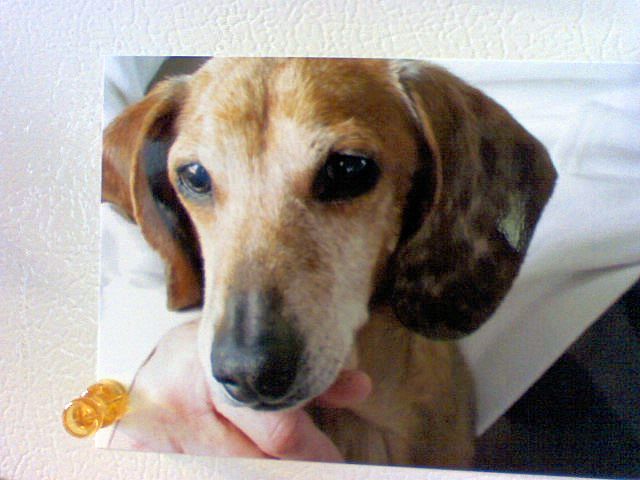 In August 2008 I adopted a dog that would change my life when it came to thinking about courage ,love and loyalty. That dog was my beloved Oscar. I got Oskie at the humane society. I was looking at a pug I heard about as I had Joey, a pug, and Maggie, a mix of beagle and BT. But the pug wouldn't fit in the clan. Leaving, I saw a red doxie - he was barking "Hey whatabout me, me , me !!!" The lady caring for the dogs said "He is blind and he is available now!" I am sure you know that pull when you see the right dog. I had never had a Dachshund before. It was love at first sight, no pun intended! I brought Mags and Joey to meet him that afternoon and everybody got along.

Oscar was a double dapple. I was later to find out, as no one kept him long enough to get a history or give a history, he had multiple medical problems: blindness due to progressive retinal disease, and he probably went blind while living on the streets!

Oscar had a wonderful personality. He would smile and play jokes on me making me think he had to go out just to get a biscuit. His spirit was bright and strong. Every morning I would take him out of his crate next to my bed and tell him I loved him. He never once appeared to say, "I am depressed I can't get out of bed today!" He loved his walks and walked proudly as only a low rider doxie can do!

Oscar had colitis resulting from severe malabsorption problems which also caused vitamin deficiencies causing baldness and skin infections. We got through one problem at a time.

In March of this year Oscar was taken by the angels and I miss him so. He showed me love, courage and a loyalty I have never seen again and will always treasure.

Elissa Hughes
Posted by Rowdy and Bette at 8:18 AM

What a wonderful life he had.

Linda and the critters said...

Bless you, Elissa for giving him the bonus years.

What a wonderful story. So sweet of you to have been such a fabulous pet parent.