Sammy Takes The 2012 Oktoberfest Zinzinnati - Running Of The Wieners 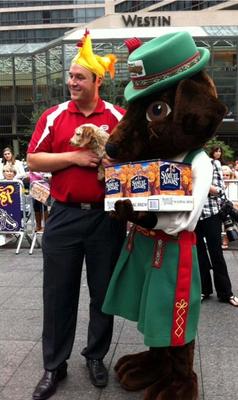 Congratulations to handsome two-year-old 'Sammy,' a smooth (longhair?) cream ticked piebald for beating out 100 other Dachshunds to take the championship at Friday's Running of the Wieners as part of the 2012 Oktoberfest Zinzinnati, in downtown Cincinnati, Ohio.  Sammy ran the 75-foot race in 3.97 seconds!  The event is billed as "the largest Oktoberfest celebration in the country and the second largest in the world."
As his prize, Sammy gets a prize pack from Fortunate Dog Spa in Maineville, a gold chicken hat, and a case of Samuel Adams Octoberfest Beer (that’s for his owner, A.J. Shellabarger of Anderson Township). 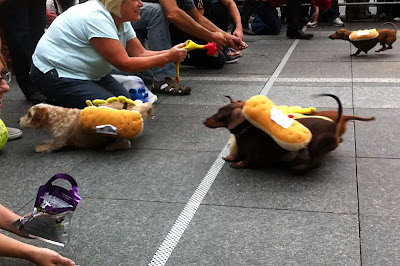 Sammy is so fast he's impossible to photograph.  He's just a blur.  Freddie and Buster have a photo finish for second place.
Posted by Rowdy and Bette at 8:44 AM

Wow, I never thought that even pets have the chance to celebrate with us during the Oktoberfest! They must be very thrilled, especially their owners. I've been hearing a lot about this huge celebration that Cincinnati has. I wish me and my friends can go there some other time.

Wirehair! Sammy looks like Peaches (whom is my dog and was featured on a wirehair Wednesday!) Peaches is a red Wirehair that because of her coat looks creamy or champagne. :)