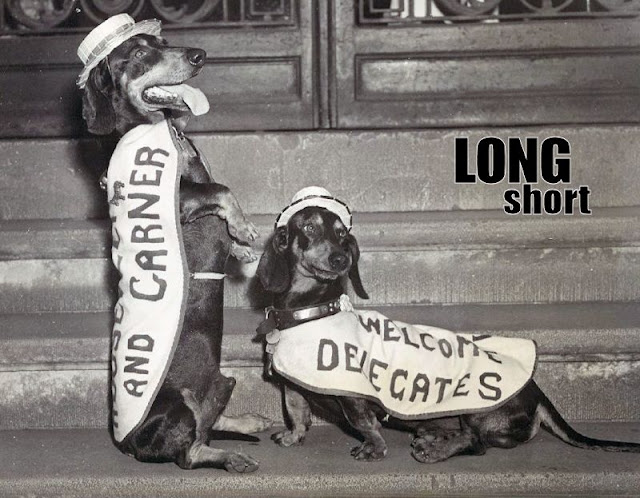 Are you tired of politics yet?  We thought not.  With about six weeks to go 'til the 2012 Presidential election, the fun has only just begun!  Looking back 76 years ago to the grand old year of 1936, Dachshunds apparently played an important role in the election, as seen here at the Democratic National Convention in Philadelphia, Pennsylvania.  In this Associated Press Photo from New York:
A NEW KIND OF DELEGATE, JUNE 20th:  "MAX" AND "ZEPP" -- DELEGATES "AT LENGTH" TO THE CONVENTION -- SHOW THEIR TRICKS TO NEW ARRIVALS AS THEY TRAVEL WITH THE WELCOMING COMMITTEE. 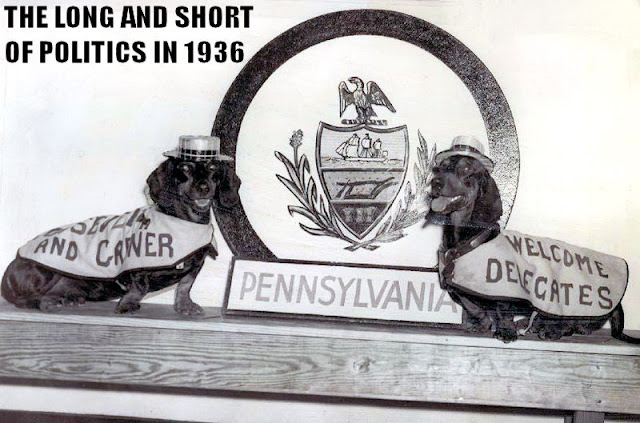 Here the Dynamic Duo are again:
JUST A COUPLE OF DEMOCRATIC GREETERS:  Max (left) and Zepp, two Dachshunds, pictured beside the Pennsylvania Insignia in Philadelphia's Convention Hall June 20.  They seem quite proud of their role as Delegate greeters.

The 1936 DNC resulted in the nomination of President Franklin D. Roosevelt and Vice President John N. Garner for reelection. Prior to 1936, the rule for nominating candidates for President and Vice President required a two-thirds vote of the delegates. However, this rule was abolished at the 1936 Democratic Convention and conventioneers adopted a rule which provided that a majority could nominate. This would allow for candidates to more easily be nominated and would thus produce less balloting. It also began to diminish the South's clout at the convention, making it easier for Democrats to begin adopting civil rights and other liberal ideas into their platforms.
An African-American minister delivered the invocation, causing South Carolina Senator Ellison D. Smith to walk out of the convention. Source.

Make sure you're registered to Vote.
Posted by Rowdy and Bette at 10:00 PM