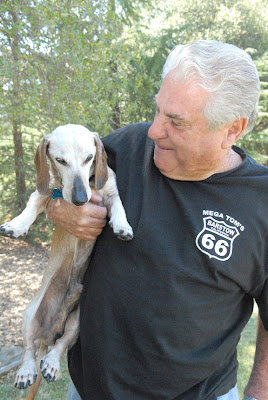 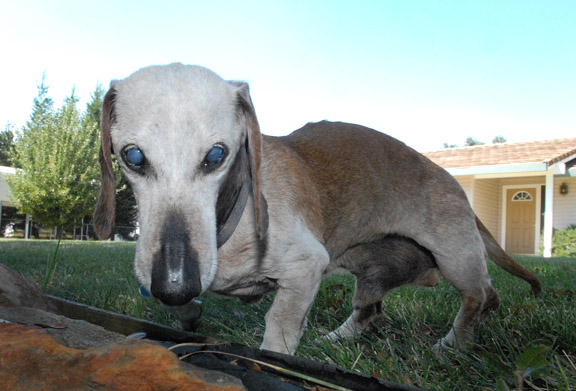 Read about more of the oldest Dachshunds on record in the archives.
Posted by Rowdy and Bette at 8:15 AM

Way ta go, Rocky. May you have many more birthdays!

Well bless his heart! Here's hoping he has many years to come. :)

You rock Rocky! Cheers to many more!

Rocky, you are amazing! Bless ya my furend.

What a wonderful dog. And so handsome! Hope you have many more happy years, Rocky.

Rocky is a handsome boy. He & my little girl doxie, Slick, could have a senior doggy love affair. She is 19 or 20 years old. We adopted her in 2002 & the people we got her from thought she was either 9 or 10. She is white faced also. Doxies are special.

U go rocky! I have a dachshund, gretchen who turned 18 last month....hope she follows rocky's lead! Dachshunds rock!

My aunt has a dachshund he is 19 years old but sadly we have to put him down tomorrow. I hope rocky has many more years to see.

God love his little soul!!! They are absolutely amazing animals. My dachshund, Odie, just turned 19 on March 18th. He is just like having a baby. He has brought me so much joy over all the years, I owe it to him to see him though these tough senior years!!

Any updates on Rocky?

I was looking to see if there were updates on Rocky myself.. searching the internet also.

we have one that is 25 years old, she is both blind and deft, but can still get around on her on.
Ron Baxley here in south Al, you can find me on fb

Does anyone know if Rocky is still living?

our dachshund is really fat and is at 20 years old starting to go deaf :( still fairly active though

Here in the South of Africa my parents also have a cross bred dachshund going on 20, almost there. She doesn't eat much but is round like a tick, due to less activity. A bit deaf but otherwise going strong.

hello all wondering if rocky is still kicking. I have a 19 year old Dachshund that still acts like he is a puppy hoping he will make 30 or more, though he is starting to get grey hair on his chin..

Aww cute keep going rocky!!!😂 you are so cute!!

That's amazing! I wish my dachschies live that long! They are 9 and 10

Woof woof from diggerjoe. I hope i look that good when im your age

Is the little angel Rocky still alive? I sure hope so, that would be such an amazing news... Go Rocky - live long!

Way to go Rocky! I'm curious if any of these doxies that have reached past 19 have ever had any seizures during they're younger years that doxies seem to have genetically? If any one has a Dixie like this can you please email me at gingermiles68@gmail.com I'd really appreciate it. Thanks

I work at a kennel and every 2-3 months we get an old dachshund that boards for a couple weeks. He turns 20 on October 9th

I wanted to ask, is there a “trick” to making your dog live longer? I cook meals for my dog hoping they will help. He gets chicken, carrots, and potato (sometimes sweet potato) both without skin. He’s a maltipoo. I want him to live as long as possible because he’s my only friend. Feel free to tell me some suggestions my email is timw.405@gmail.com maybe some vitamins or something I can add to his diet.

I have always been fascinated by Dashunds they are so loving and caring for their owners! I have the first two still going strong at 18&17 and I couldn't be prouder of the love and protection they give over the years!! GBT!!