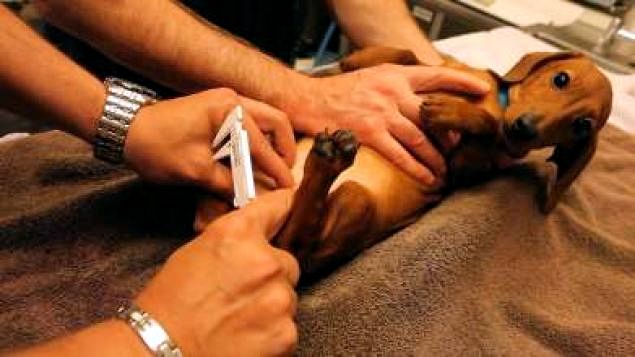 Hold on to your cojones fellas, the humans have done it again.  They've developed a new way to neuter dogs that requires no surgery or anesthesia - no SNIPPING - just a local zinc injection called 'Zeuterin.'   Will it cause Neuticles to go out of business?  Will it revolutionize sterilization procedures?  Excerpt from The New York Daily News:

A new way to neuter dogs requires no surgery or anesthesia, but convincing veterinarians to embrace the new technology will take time.
“Change does not come naturally, and private veterinarians do not have a problem to solve right now,” said Sandeep Manchanda, executive team member of Ark Sciences, the Westchester-based company behind the compound.
The nonsurgical neutering consists of locally injecting a compound of zinc gluconate and arginine into the testicles. It works by killing sperm-producing cells, decreasing testosterone to between 41% and 52%. The testicles shrink some, but remain largely visible.
That’s the main reason why the Liberty Humane Society in Jersey City was among the first to jump in.
“We want to have an option for people who otherwise wouldn’t get their dog neutered,” said LHS shelter director Irene Borngraeber.
So far, about 25 dogs have been “zeutered” at LHS — and 500 across the U.S. — including some that would not have been able to undergo traditional anesthesia due to health reasons.
Among them is Yofi, a puggle who was neutered at 6 months at LHS, after his owner went searching for a nonsurgical procedure. Despite a sore groin area that subsided the following morning, the process went great.
“To me, it’s less cruel than surgically neutering a dog and less invasive — and everything about it is much faster,” said Yofi’s owner Rachel Zelman, a Manhattan office assistant.
The permanent sterilization procedure can be done in less than 10 minutes and requires only a mild sedative. All zeutered dogs have a large green “Z” tattooed on their inner thigh.

That is fabulous news. Hopefully will be much cheaper than a traditional neuter which will encourage more pet lovers to get it done!

I want to know more about side effects and research if any.