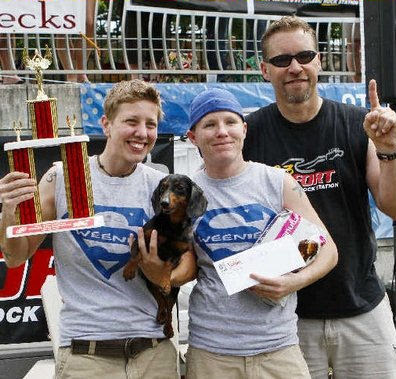 Billy Elvis from 92.3 FM congratulates first place winner Fender Bender and his handlers Nico Kuechenberg, left, and Katie Knight.
Congrats goes out to 3.5-year-old smooth 'Fender Bender' and his humans for beating out over 100 Dachshunds and taking the 18th Annual Wiener Dog Nationals during Germanfest at Headwaters Park in Fort Wayne, Indiana on Saturday.  This race boasts a lot of rivalries year after year, and Fender Bender had to take on returning champ 'Budrick von Brat' to take the crown.  Mr. Bender finished second last year.  Excerpt from the Journal Gazette:

Lured by co-owner Katie Knight yelling “I’ve got beer!” and waving the dog’s favorite yellow squeaky ball at the finish line, the dappled dachshund tore down the 50-foot grass track to victory on Saturday afternoon.
His official awards included a trophy, a bag of dog food and a gift card to Uncle Bill’s Pet Center.
But his ultimate reward probably was nibbling a hot dog on the only day of the year he’s allowed to eat “people food,” Knight said, who was wearing a “Team Fender” T-shirt.
Read all about the big race at the Journal Gazette and see more photos here.
Posted by Rowdy and Bette at 9:22 AM