Celebrity Dachshund Watch: Ke$ha Wants You to Name her Dachshund 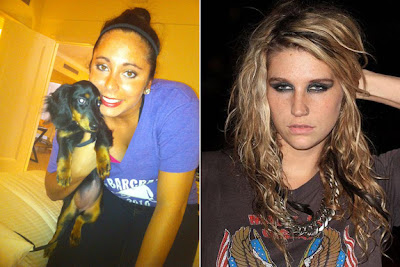 Who?  We've no idea really.  But a quick look on wikipedia tells us that Ke$ha is an American pop singer-songwriter and rapper. Her debut single "Tik Tok", released in late 2009, reached number one in 11 countries. Her debut album, Animal, was released in January 2010 and debuted at number one in the US, Canada and Greece.   And now she's a Dachshund Lover.  And she needs a name for her girl.  She tweets:
Just got a puppy!!!! First pet ever. She's a wiener dog! So cute. Need a name. A badass name. Help!
And later:
Ok so far down to bacon, iggy, jagger, bowie or roxy (after roxy music)
Ke$ha - our vote is for Roxy - we love that name for Doxies.  Bacon, Iggy, Jagger, and Bowie just aren't dignified enough for a princess like this pup.
Posted by Rowdy and Bette at 7:59 AM

Bacon on it's own would raise an eyebrow or two, but if one was brave enough to take on 3 doxies at once and name them Bacon, Lettuce and Tomato, geeez, you talk about an ice-breaker at the dog park!