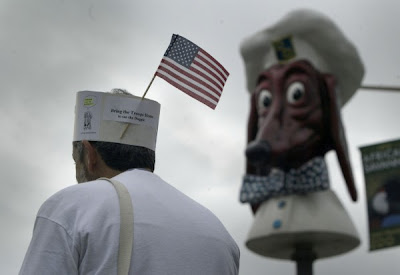 Thanks so much to our pal 'Franny' over at the always engaging Doxiementary for sending in the link with the sad news.  She writes:
Hi Maggie & Joey!
Hope all is well! I thought I would share some news about the Doggie Diner (with the famous Dachshund head) in San Francisco.  Via the SFGate:
The former site of a Doggie Diner outpost is set for demolition. The local classic out in the Sunset has been defunct for years, and the grinning dachshund moved down the block as an official landmark in 2005, but the building has remained.
Now, it looks like its days are numbered, as Ocean Beach Bulletin brings word that the one-story building at 2710 Sloat Boulevard (between 45th and 46th) is set to be demolished.
Most recently, it housed the Carousel Diner, but it’s been vacant for a while. Now the plan is to convert it into an “additional outdoor sales area for the Sloat Garden Center.”
City Planner Thomas Wang says that if no one files a discretionary review (complaint) by July 8, then he can sign off on the demo and pass the application onto the next city department. Tell it goodbye.
And so goes another piece of Dachshund History.  At least they saved the Dachshund Head.
Related:  Al Ross, founder of Doggie Diner Passes
Related:  Dachshunds in Pop Culture: "Head Trip" The Movie
Posted by Rowdy and Bette at 8:45 AM