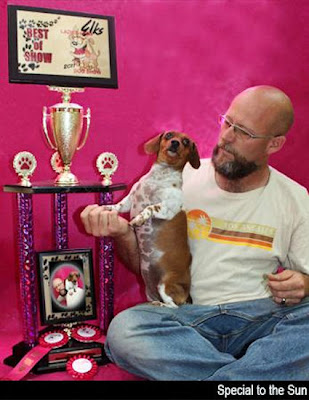 That's some trophy there Breezy!
Congratulations to pretty red smooth piebald 'Breezy' for taking "Best of Show" at the Ladies of the Elks 4th annual Dog Show, in Wofford Heights, California, on May 21.  Proceeds from the annual Dog Show go to support the Elks Lodge No. 2358 scholarship fund.  Excerpt from the Kern Valley Sun:
Four-year-old Breezy Baby, a red piebald Dachshund with a natural Mohawk, was not only was the most obedient dog at the show, she was the one with the most spots, the shortest legs and when rolled all together - the epitome of the perfect pet.
Breezy also won “Most Obedient,” among other categories, collecting the most ribbons among the dogs entered. Breezy’s stunning trophy was sponsored by Kernville Animal Hospital.
Not that she's spoiled, but Breezy's four little legs rarely touch the ground. Scampering up owner Danny Elam's leg to his shoulders, Breezy views the world from her favorite perch, wrapped around Elam's neck.
“Breezy's conformation, obedience and congeniality were head and shoulders above the competition,” quipped show co-chair, Laurie Ashley.

Read more about Breezy and the event at the Kern Valley Sun.
Posted by Rowdy and Bette at 8:36 AM