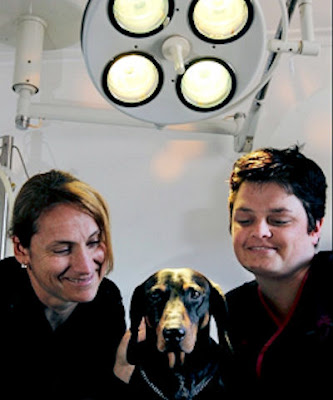 'Jonah' is a lucky dog
Meet Dr. Kirsten Wylie, nurse Amber Walker, and 'Jonah,' the handsome black and tan smooth.  Jonah was undergoing surgery for tumor removal on February 22nd in Christchurch, New Zealand, when the massive 6.3 magnitude earthquake struck.  But our dedicated professionals, our heroes, did not leave Jonah's side.  Excerpt from stuff.co.nz:
Kirsten Wylie was in the middle of a delicate operation to remove a cancerous tumour from a small dog when the earthquake struck.
Wylie refused to leave Jonah, an eight-year-old dachshund, in the Linwood surgery, completing the 45-minute procedure to remove a thyroid carcinoma by the light of a torch, along with nurse Amber Walker.
Nor did she flinch when she had to blow air into a tube to keep the dog breathing until an oxygen bottle could be connected manually.
Wylie said the "fiddly" operation had been made more difficult by the big jolt, but she never thought of leaving Jonah.
"From where I was standing, I could look out the window and see the fence falling down," she said.
However, the dog "was blissfully unaware of the earthquake".
Wylie was yesterday reunited with a recovering Jonah.
Posted by Rowdy and Bette at 9:16 AM

What an awesome vet! I teared up a little reading that.

That is so touching. Yep, I got a little lump in the throat too reading that. God bless them and sending healing vibes to Jonah.

Bravo Dr.Wylie and Nurse Walker for sticking by Jonah...you're both a credit to your profession(s), thank you for risking your life for this K-9!