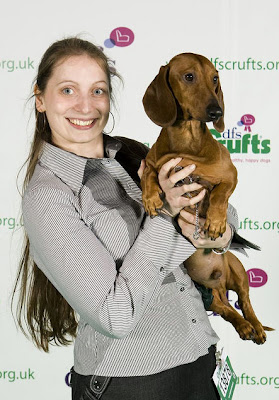 Katerina Belova from Moscow, Russia with her Dachshund (Smooth-Haired) called 'Chester,' who won Best of Breed March 12, 2011, the third day of dfs Crufts 2011 at the Birmingham NEC
Congratulations to all the Dachshunds and dogs who competed at the 2011 Crufts Dog Show in Birmingham, UK over the weekend.  A beautiful Basset Griffon Vendeen (Petit) took the hounds, and a striking Retriever (Flat Coated) took Best in Show.  See all the Best in Breed Dachshunds at the Crufts official site (scroll down to select Dachshund under the Hound group).


And congrats to Sue Ergis from Poole, Dorset with her Dachshund (Miniature Smooth-Haired) called 'April,' who took Junior Warrant winner on March 11, 2011.
Posted by Rowdy and Bette at 8:53 AM

Chester looks real handsome and April is one hot dawg:)

Baron says, "Handsome and Hot...that works for me!"

Wow! Katerina is our breeder! Our doxie Dessi is from her kennel Excelmagic.