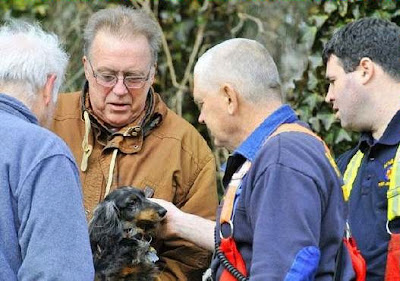 How on earth do we get ourselves into such trouble sometimes?  Meet handsome dappled black and tan longhair 'Snoopy,' being cradled by his Dad Robert Segersten.  The Hyannis, Massachusetts canine was playing with his friends on Tuesday morning - 'Kooper,' a German shepherd, and 'Maizie,' a standard poodle, when he went to hide.  Then came the whimpers for help.  Excerpt from the Cape Cod Times:
"I tried to get him out. I tried prying up a floor board, but it didn't work," said Larry Rayment, a neighbor and Maizie's owner. "I was outside and down on my stomach trying to coax him out, but Kooper and Maizie kept dropping balls on my behind to get me to play fetch with them.
"That's when I decided to get some help. It was my wife who called the fire department."
In what Robert Segersten, putative owner of Snoopy and Kooper, described as "the most exciting event in our neighborhood for years," Hyannis firefighters arrived ready to rescue.
"It's not exactly 33 Chilean miners, but it is nice to know the fire department will come out here to help a dog in trouble," Rayment said.
Snoopy had no comment, but when confronted by a reporter sought refuge back under the shed.
"Don't call the fire department," Segersten said. "Not yet at least."
We love it.  Read it all at the Cape Cod Times.
Posted by Rowdy and Bette at 8:41 AM

So happy Snoopy rescued! Well done to the fire department!