Dachshunds in the Wake of Devastation: Our Friends, Our FAMILY 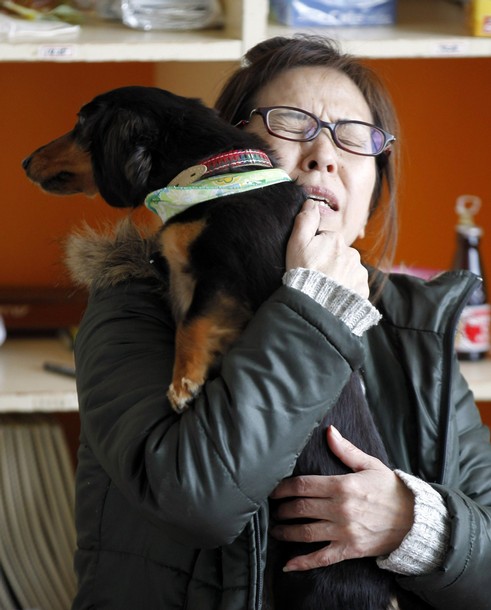 Often times a photo can express more than mere words.  Here, a woman comforts her Dachshund during an aftershock at an evacuation center for pets and their owners near an area devastated by an earthquake and tsunami in Kesennuma, north of Japan, March 17, 2011.   Hold your little ones tight. 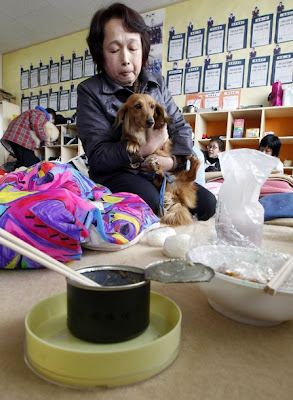 Here, another woman holds her Dachshund at the evacuation center.  Thanks so much to our friends at Dachshund Delights for sharing the shots.  See more photos at Reuters.  Please consider making a donation to our Japanese friends in this time of need.  WorldVets might be a great organization to consider.
Posted by Rowdy and Bette at 9:02 AM

I'm sure most of you have seen the video of the one dog who was staying with his injured pal until help came. I heard that they are both recovering.

Doxies are probably the perfect dog for the Japanese as they are small and apartment-friendly. Those photos are so sweet!

The Japanies loves their dogs, its a well known fact. I've seen world vets at work in another disaster area, caking care of animals from pets to cows etc.

I am so happy these two ladies were able to protect their dachshunds and keep them with them. It was so horrible after Katrina, when pets and humans were separated...I'm sure that has happened here too, many times over, so horribly tragic. I will check out WorldVets! Thanks for the post!