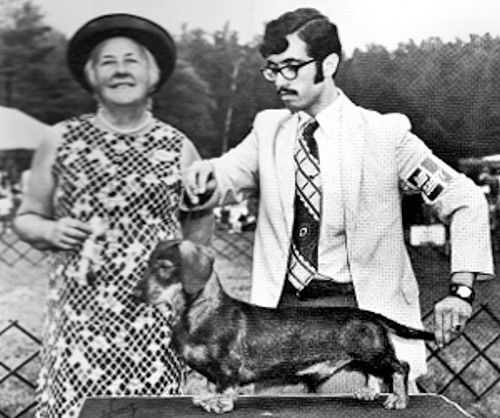 A Sterling Son of a Sterling Stud!  OUR NEWEST CHAMPION:  None Such True Grit:  This outstanding puppy took only two months to finish with 3 Majors.  On the way he had a BOS over a Group-placing Special.  He is pictured finishing on the New England circuit at 11 months.
Congratulations to Ch Ventebe's Draht Timothy, his sire, owned by Peggy Westphal.  "Timmy" is a handsome dog with a remarkable record.
GRIT is already proven, and in view of his tender age, offered for Limited Use as a stud.  We hope he will follow proudly in his father's footsteps.


via the American Dachshund magazine, October, 1972
Posted by Rowdy and Bette at 12:12 PM