They say to keep your friends close and your enemies closer, so we keep a keen eye on what's happening in the world of Badgers.  Apparently a badger in the Motherland, in the eastern state of Brandenburg, has unearthed the 12th Century tombs of two medieval lords.
We haven't been this excited since a wirehaired Dachshund unearthed a 2 million-year-old fossilised mammoth bone way back in 2007.

Via The Daily Mail:

Badgers might be known for being a menace in gardens by digging up lawns, but the creatures have proved they can be useful by helping German archaeologists uncover the graves of Medieval warriors.
An artist saw the badgers digging up bones and called experts to find out what the creatures had uncovered.
Archaeologists expanded on the badgers' helpful excavation work to uncover eight graves, including two skeletons that appear to noblemen.
This nobleman above was buried with a bronze belt buckle of a snakes head, a double edge sword and bowl by his feet ( all pictured). Archaeologists said he was a well-equipped warrior. Scars and bone-breaks show that he had been hit by lances and swords, and had also fallen from a horse.

Read more at The Daily Mail. 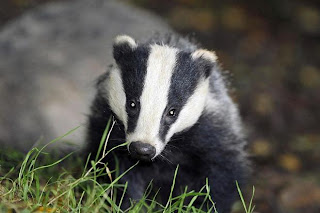 Yes, they're kinda cute, but don't let them fool you!
Posted by Rowdy and Bette at 8:22 AM

Mom and I are so happy you took a little break this summer, and we are even happier that you are back! It's so nice catching up with you. Hope Bette survived her time in heat. And that you all did, too. :)