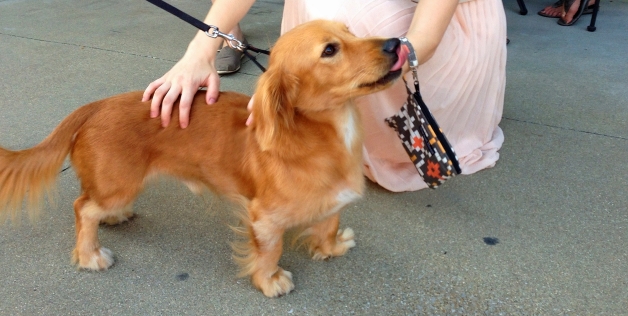 A Golden Wiener?  A Wiener Retriever?

This photo is making a splash on the net - it was originally posted on Reddit a few days ago under the title "This is what you get when you cross a Dachshund and a golden retriever."  Some 1300(!) comments later, it was posted to MSN where they noted:

You've got to wonder how this happened: "You've got a lot of confidence for a dog your size. I like that," a golden retriever said flirtatiously to a dachshund. "Well, today's your lucky day, because I've got a thing for tall blondes," the dachshund replied with a roguish wink. After a few dates in the park, a coy game of tug and war, the love of a lifetime blossomed between the fetching couple, and along came this guy, a gorgeous golden retriever-dachshund mix. You don't see this kind of dog very often, but we sort of want one. He makes us believe all those romantic comedies about how opposites attract.

What do you think this doggie is?  An English Cream?  An odd but pretty red longhair?  A red longhair mix?  Or is he/she really a Dachshund/Golden Retriever mix?
Posted by Rowdy and Bette at 7:57 AM

Today I'd believe just about anything when it comes to mixing the breeds. This guy looks like a Golden with short legs.

Just want to start out by saying, again, how great it his to have TLASOIA back and posting.

The doggie pictured is clearly of the 'precious' variety, and that certainly could point to both Golden Retriever and Dachshund parentage. We're just glad this sweet baby is loved, and we hope there's a long and richly lived life ahead.

And that's the take from the PA Piebalds, Maggie, Max & Melly.

That's a very pretty dog indeed. I love the love story! And given the look of the head, especially around the eyes, I could buy the idea that it's a true love story...

I met a basset-retriever mix once and it looked someone similar to this. IIRC, it had the short legs of a basset, an overall smaller size than a retriever, but otherwise looked like a retriever in fur, head shape, etc.

one of our dogs is the same mix. But she has short hair. She looks like a retriever with short legs.

I have read about a case of a dachshund mating with a great dane...It was a MALE dachshund and a lady dane in heat who fell asleep in her front yard. Whether she ever awoke under the ministrations of her assailant is unknown, but the end result was a litter of "great dachshunds" , who turned out to be virtually indistinguishable from their mom at maturity. They were a bit floppier in the ear and had legs 3" shorter than the dane norm, but otherwise the weiner genes were swamped. Did they inherit their father's personality and activity level, but in a much, MUCH larger body? Perhaps...And that's a scenario out of a horror film!