Napoleon Lands His Mom in Jail for Being a Vicious Dog; Charges Dropped 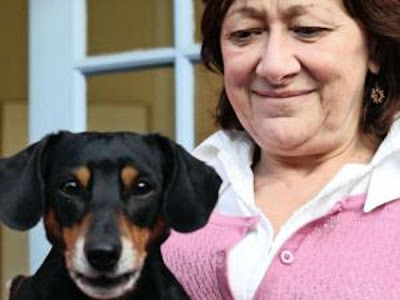 Meet little 'Napoleon,' and his mom, art teacher Mary-anne Baasch, who hail from Durban, South Africa.  Mrs. Baasch was driving her car out of the garage a year ago, and Napoleon darted out and bit a security guard walking past her home.  He had never bit anyone before.  She offered to pay for any medical expenses - the bite looked like "more like a graze," according to Mrs. Baasch, but the guard refused.
Then  just a few weeks ago, she was hauled into the pokey and locked up over the charges of keeping a vicious animal.   She was then released with a notice to appear in court a week later, but her charges were dropped when they didn't appear on the roll for that day.
Mrs. Baasch is considering suing the police for unlawful arrest.   We don't blame her.

Read more at The Star.
Posted by Rowdy and Bette at 9:04 AM

Thank Dog, it was dropped. Goes to show that "all the world loves a man in uniform" is not true. Napoleon is sure darn cute!!!!