Dachshund Lover Punches Bear To Save Her Dog! 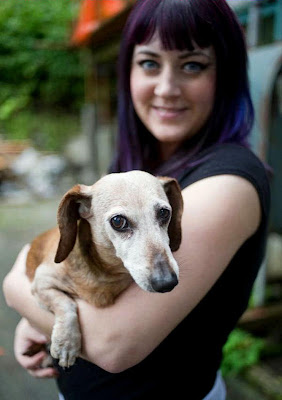 Brook Collins holds her dog, Fudge, at her home on Tuesday. Collins punched a black bear in the snout after the bear attacked Fudge on Sunday.
What are those words in the AKC Dachshund Breed Standard -  courageous to the point of rashness - yes, that's it.  Apparently those words not only apply to Dachshunds, but Dachshund Lovers as well!  Meet 22-year-old Brooke Collins and her beloved red smooth 'Fudge,' who hail from Juneau, Alaska.  Miss Collins let Fudge outside to do his business about 7:30 PM on Sunday night and he started barking immediately - “the most horrible sound in the world” said Miss Collins.  Excerpt from the Juneau Empire:
Collins said when she looked outside she saw a bear was crouching down with Fudge its paws and was biting the back of the dog’s neck.
“That bear was carrying her like a salmon,” she said.
She said she almost instinctively went up and did the first thing she thought of. She punched the bear’s face and scooped away her dog when it let go.
It all happened too fast to really think about but she had flashes of hearing about how some animals will back off from a punch to the nose, she said.
“It was a stupid thing but I couldn’t help it,” she said. “I know you’re not supposed to do that but I didn’t want my dog to be killed.”
Fudge suffered some claw and bite marks which weren't deep and required no medical attention, but he will be taken in to the vet if they become infected.  Read more at the Juneau Empire.
Posted by Rowdy and Bette at 8:47 AM

well done! don't know if i could do it, but for our pets we do strange things...

When the adrenaline gets going, (and before you have time to really think about it), I bet 9 out of 10 doxie owners would have done the same thing. And that 10th doxie just might have been able to scare the bear off itself! Glad everyone is o.k.

I'm so glad that her dog is okay! We can all understand how a dog (especially a dachshund) is a member of the family. I know I would personally try to do anything in order to save my own. Good for her!