Judge Rules: Owner Who Gave Away Dachshund After it Bit his Granddaughter Cannot Have Him Back 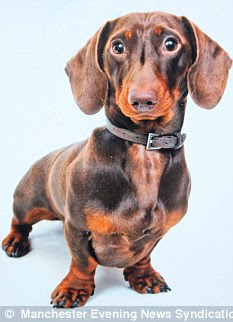 We're sure you remember the story back in May of Gary and Moira Rowlinson who hail from Stockport, Cheshire, UK.  They gave away their beloved Dachshund 'Bailey' to family friend Steven Spencer, after Bailey bit their 2-year-old granddaughter.  They realized their mistake the next day and asked for Bailey back, but Mr. Spencer refused.  Then it went to the courts.
The judge has ruled:  they can not have Bailey back.  Excerpt from the Daily Mail:

A judge has ruled that a man who gave away his pet dachshund after it bit his granddaughter cannot have the animal back.
Gary Rowlinson, 55, from Stockport, Cheshire, immediately regretted his decision to hand Bailey to his friend, Steven Spencer, and asked for him back - reportedly offering £1,000.
But Bailey's new owner refused, so Mr Rowlinson and his wife Moira decided to take legal action under the Return of Goods Act.
The custody battle was settled today at Stockport County Court when it was ruled the 'gift' could not be taken back.
Mr Rowlinson, a joiner from Offerton, said his family were 'devastated' without Bailey, a miniature dachshund he bought as a puppy for £700.
Following the hearing, Mr Rowlinson told Granada Reports: 'The judge has made his decision and I said I will abide by that.
'I will have to get on with my life and put it behind me.'

Read more and see more photos at the Daily Mail.
Posted by Rowdy and Bette at 8:00 AM

What a heartbreaking story. Especially for Bailey. How sad. Not even sure who I would have sided with, but I do know this, giving away my beloved pet would not have been an option.

I have thought of this very thing, if and when I ever have grandchildren. My three are the queens of my home and they have never been around children. I expect there to be some issues to come up (If I ever get grandkids) but giving my girls away would never cross my mind. This is very sad indeed.

This is an easy one. He gave the dog away!!! He doesn't deserve to get the dog back. Responsible pet owner's don't do Knee Jerk Reaction. Small Children should Not Be Left Alone with Wien's or any other small dog's in the first place.

Baily must be one awesome dog for people to fight over him. But aren't ALL Doxies awesome? Ha, ha.

I agree with what anonymous above said. Never leave a dog alone with small kids. I have 4 dachies and I prefer to visit my 3 young grand kids at their homes than have them over at my home because of the stories of dachies biting kids and even adults (re: story of vets tech who had her lip bit). It's safer for grand kids and my 4 fur kids. Also, its a bonus for me, as I don't have to keep a watch on kids/dogs, I don't have to cook or clean up after grand kids are gone and both grand kids and dogs are more relaxed in their own homes. AMEN and Woof.