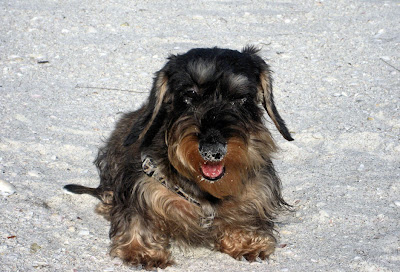 Thanks so much to Nuris Fanning for sending in the story of 'Toby,' a handsome, silky-looking wirehair rescue who will start your week off right.  Without any further ado:

The story of little Toby began when my minature dapple short haired Dachshund Ringo
passed away from an enlarged heart. I couldn't bear the pain of not having
my little buddy around , so I search and search for another little buddy, when
I came across Underdog Rescue in Bradenton, Florida. I saw so many loving Dachshunds available for adoption, so we drove from the east coast of Florida all the way to the west coast to Bradenton, Florida where I was lucky enough after 2 hours of waiting to finally see
him. The minute I saw him, I knew he was mine. He was severely beaten and had
barely any hair, he was covered with pooo still in his coat which they told me he had
been given numerous baths, he had wired stitches because he was neutered and still had
them. I immediately took him in my arms and cried. He is truly my little man. He
guards me with his life. At first he wouldn't trust anyone, now he enjoys treats,
like little cones with whip cream. I spoil him rotten, because he loves me so. He loves
the beach, as a matter of fact, we spend all 2 months of summer at my sister's
beach house. Now, I believe he is one happy tail!

Have a great Monday!
Posted by Rowdy and Bette at 9:19 AM

Linda and the critters said...

Toby is lucky to have found you! Thanks for sharing his story.

how can people beat animals, especially tiny ones?!?! i don't understand it. :(

but what a happy ending and a beautiful, happy boy!!

What a happily-ever-after story! Thanks for sharing it. :-)

hey, i've just found this blog and it's amazing :) i love dachshunds too, but i don't have a one.. BUT one year ago i made an on-line game called 'gdzie jest bobik? - where's bobik?' - bobik it's name [polish, i'm from poland] of dachshund, but not quite ordinary dog.. :) full name of game is "gdzie jest bobik? where's bobik? photo urban warsaw walk game" ..because your mission is to find dachshund bobik who has lost in warsaw. so, you can search bobik and have a virtual walk around warsaw in this same time! game's interface is translanted into english, so all dachshund's [and poland or/and warsaw] lovers are welcome! find bobik! :)

Sniff... Kills me to hear of dogs being abused.

Toby is one lucky dog to have found you, and you, well you know how lucky you are to have Toby!