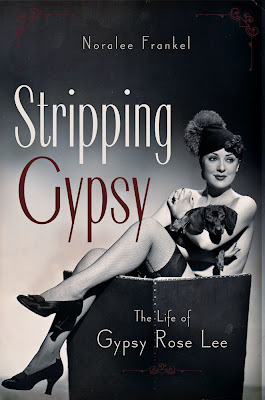 
Woof, WOOF!  We've got a very special Dachshunds in Pop Culture series to share today.  Certainly you remember the video we featured a few weeks ago called Play?, where a Dachshund and his tennis ball take a trip around Richmond VA?  As it turns out, Elizabeth Kost, the videographer, informed us that her mother, author Noralee Frankel, had recently penned a new book titled Stripping Gypsy, a biography on the glamorous American burlesque entertainer Gypsy Rose Lee, and that yes, Gypsy was a Dachshund Lover!
We asked the author if she would write a short synopsis of Gypsy Rose Lee, including any information she had about her Dachshund, and she graciously agreed.  We are indebted to Noralee's contribution. So without any further ado:

Born in Seattle in 1911 Louise Hovick toured vaudeville with her driven stage mother and her younger sister. When her sister ran off to marry and with vaudeville dying, Louise performed in burlesque theaters. In 1931, Louise, now Gypsy Rose Lee, worked Minksy’s theaters, where she became one of the very few women to talk as she undressed on stage. After a brief stint at the Follies, Gypsy traveled to Hollywood for a disastrous career in movies produced by Twentieth Century Fox. The censors watched Gypsy constantly and made the studio very cautious about Gypsy’s parts, dress, and conduct.

Upon her return to New York, Gypsy joined a writer’s colony in Brooklyn Heights with poet W. D. Auden and writer Carson McCullers where she received help with her first mystery, G-Sting Murders. Contacted by impresario Michael (Mike) Todd, Gypsy performed a strip tease at the New York World’s Fair. She provided financial backing for her and Todd’s triumphant Broadway show, Star and Garter.

In 1950, the American Legion declared that Gypsy was a Communist sympathizer and demanded that Gypsy be removed from television and radio for her radical political beliefs and Gypsy was black listed from TV and radio. She only redeemed herself when she wrote her memoirs, which became the basis of the hit musical, Gypsy. In the mid 1960’s, a television station in San Francisco offered her a syndicated talk show. She was a perfect talk show hostess and the show was successful for three years. Her fans loved her. Soon after Gypsy was diagnosed with lung cancer and she died five months later in 1970.

In 1937, Gypsy married Robert Missy. Hitching Gypsy's trailer to the back of their car, they traveled across the country with her dachshund, 'Wilemina,' and her six pups. Here’s the story:

“We had a honeymoon quarrel and called each other all the names we could think of," Gypsy recounted, "and we were both resourceful, especially me, with a diploma as a master cusser from all the burlesque wheels I've toured." She predicted the demise of the marriage "but in the midst of the confusion my dachshund bitch started to have pups. We couldn't get a vet, and Bob proved to be the kind of man you can lean on in an emergency. He did an excellent job of midwifery." Gypsy "figured any girl like me who always travels in a cloud of animals needed that kind of man around, so we were married again."[i] 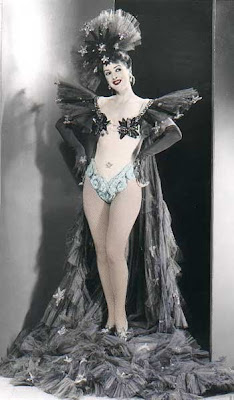 In this video, Gypsy Rose Lee does an abbreviated version of her burlesque routine from the 1943 movie Stage Door Canteen.


Thanks again Noralee.  Stripping Gypsy: The Life of Gypsy Rose Lee, the acclaimed new biography by author Noralee Frankel, is available at Amazon for just $18.45.
Posted by Rowdy and Bette at 9:38 AM

This is such a great retrospective. Thanks so much. It's so ridiculous that she was found to be a communist sympathizer.

What a treat to see this film clip!
Gypsy definitely "stripped sweet"...
Thanks so much, Elizabeth and Noralee.