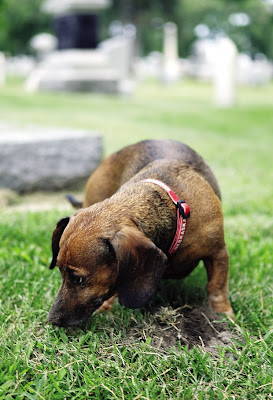 Thanks so very much to our pals 'Sophie' and 'Oliver' for writing in of the passing of a true Dachshund Legend:  'Bubba' the Mole Hunting Dachshund, who hailed from Fremont, Nebraska. They write:

This was on the front page of our Fremont Tribune today.  We know you've featured this mole-hunting wizard before and would like to know that he has passed on at the age of 13.

Awww...., our hearts sure go out to Bubba's family and friends.  Here's an excerpt from the article:

If moles had the ability to understand the news, they might be breathing a collective sigh of relief.
But this is a sad time for Fremonters Dale and Betty Reandeau and others who loved Bubba.
The Reandeaus’ miniature dachshund — estimated to have rid Ridge Cemetery of more than 600 moles throughout the years — died Saturday. He was 13.
The little dog had been ill before his death. Bubba had Cushing’s disease and pancreatitis, Dale Reandeau said.
Bubba’s mole-hunting efforts had diminished in recent times.
“He got 16 this year and then he just quit,” Reandeau said. “He didn’t want to go to the cemetery any more. He didn’t want to walk. All he wanted to do was eat, lie on the couch and sleep.”
Bubba’s mole-hunting endeavors began years ago while the Reandeaus took him on walks in the cemetery. Before that, moles were a headache for then-cemetery sexton Jim Clarke.
Almost like a second career, Bubba became a lean, mean mole-hunting machine.
“He’d walked there (in the cemetery) almost forever and then all of a sudden, that was his job — to get those moles,” Clarke said. “He could hear them. They’d be 100 feet away and he’d go get them. He did a big service for us. He kept those moles under control for a lot of years.”
Clarke estimates the dog killed about 100 moles a year and Bubba became a celebrity of sorts. The Reandeaus got comments from people in other parts of the state after The Associated Press picked up a Fremont Tribune story about the dog.
“Bubba became even more beloved by Fremont citizens, because he was part of the cemetery historical tours. His owners would bring him and tell his story,” said Cherrie Clarke, cemetery historian.
The Reandeaus will miss their pet. Dale, 80, doesn’t know if they’ll get another. At first, Betty said “no more dogs.” He’s hoping she’ll reconsider.
“Maybe next spring we’ll get another dog. I hope so,” he said.
In the meantime, the Reandeaus and others are remembering the perky pup.
“He was a wonderful dog,” Reandeau said. “I don’t know that we’ll get another one like him.”

Rest in Peace little guy.  Read more of this story at the Fremont Tribune.


Related:  July 23, 2008:  The Working Dachshund: Bubba's on Mole Patrol at the Local Cemetery