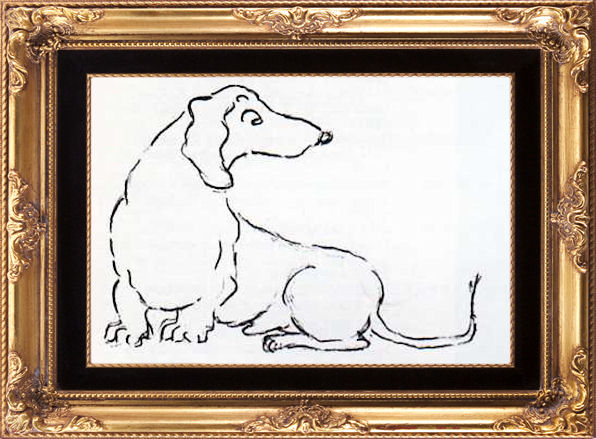 We first posted this installment of Uncle Peterfritz's Lively Tails for Little Dachsies way back in November of 2008.  Have you been with us all these years?  We find that our archives really have some hidden gems, and this tale is especially poignant with the recent election - so enjoy, here it is again.  Don't forget to VOTE!


Words and Drawing by FRANCES MEUSEL for The American Dachshund, June, 1965.

ONCE UPON A TIME (said Uncle Peterfritz) when half the world was water and our ancestors hadn't decided whether to be sea-eels or Dachshunds, the familial tail was quite different from what it is now. It was broad as a beaver's, flat as a salmon's, and as awkward to carry around as a fur-lined surf board with fringes, which is what it mostly resembled.
"Really, we cannot go on like this any longer!" declared one of the Elders, "the country is getting too crowded for it. A year from now there won't be enough room to wag properly. Yes, the time has come for us to evolve into one thing or an otter; either we detail or go float; it's to sea or not to sea; and I say we should put it to vote immediately."
They all agreed to do this, so an election day was set, a polling place designated in a neutral area neither sea nor land, and the electioneering began.
There were barbecues, drag-races and free biscuits, sponsored by the Reds who were in favor of staying on land; there were beach-parties, regattas and free fish-fries sponsored by the Blacks who favored the sea; there were orations by everybody. It was very exciting.
But those who enjoyed it most were the little whelps who were too young to vote. All the old dogs were so busy politicking they let the pups run loose, so they attended every rally, gorged on free fish and biscuits, and altogether had a glorious time of it.
One day, however, when all the little whelps were sitting around the polling place resting up from the fun, they started to argue among themselves.
"The Blacks are the Good Guys," remarked one, "my Papa says so, he's a Black."
"You're poodled!" scoffed another, "it's the Reds are the Good Guys. My Mama's a Red and she ought to know."
"My Papa said your Mama is a dupe!" declared his neighbor. "He says she'd believe anything. He says just because some people can't tell tails from flails is no reason to deprive -"
"All blacks are back-biters, so there!" snarled the second whelp, and he brought his tail down in a loud slap for emphasis.
Remember I told you the polling place had been set in an area which was neither land nor sea? Well, this sort of terrain is called a swamp, and when anybody makes a slap on a swamp it's likely to send the landscape flying, which is what the second whelp's tail did.
"Who threw that mud in my eye?" yelped a whelp on the edge of the crowd. "I'll show you!" and backing up to a puddle of red gumbo he brought his tail down in a sharp THWACK!
That did it! Within minutes there wasn't a whelp that hadn't joined the war; tails were slapping down faster than you could count, red mud and black mud filled the air, and by the time the adult dogs came rushing up to stop the fight there was nothing to distinguish one whelp from another - or from what was left of the swamp itself, for that matter.
It took hours to separate the combatants and days to get them cleaned up to the point where a matron could be sure she had her own whelp - even so, a few Manchester and Doberman free-loaders, who'd been caught in the fray, weren't identified for several months. In fact, to this day they haven't been able to get down to the original color of those whelps who'd been operating in the LaBrea area, and you know yourself that there's not a neutral acre left anywhere in California.
Naturally, after the worst was over nobody had any energy left for electioneering, even if they had found the ballot box - which they didn't, or had wanted to vote, which was no longer necessary because all the dogs of both parties had reached a simultaneous and unanimous decision: the big tails must GO! they were just too dangerous for whelps to play with.
So this is why our ancestors became land-dwelling Dachshunds, and why our tails look like paint-brushes instead of surf-boards.
It is also why we Dachshunds are non-partisan and avoid all political discussions. After all, eyebrows and a drop-seat are one thing - but have you ever seen a Dalmatian?

Related:  Uncle Peterfritz's Lively Tails for Little Dachsies: Stop the Earth, It's Going Too Fast
Posted by Rowdy and Bette at 8:30 AM