You Can't Catch Me: Stray Dachshund Eludes Authorities and Community for Five Months! 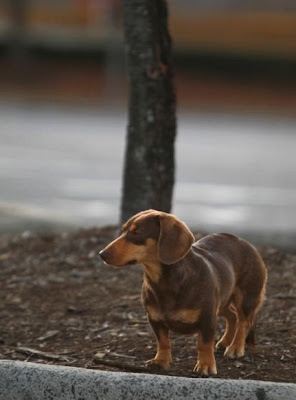 “It’s hard for us to chase a dog that’s only a few inches tall.”

She's living like a King in Gastonia, North Carolina and has no intentions of being caught.  Why should she?  She's become quite popular among the citizens who visit her every day and give her table scraps and sausage biscuits from Bojangles - just don't try to approach her - or she'll run off into the nearby woods.  The little chocolate girl has been on the lam for five long months now, apparently escaping from her human while visiting a nearby PetSmart.  Via The Gaston Gazette:

Gaston County Animal Control officers have made multiple attempts to lay their hands on the dog, to no avail. Several dog lovers also tried to capture the canine – bringing food and attempting to gain her trust.
The amount of attention the dog has gotten is atypical, according to Steve Rhyne with animal control. He guessed that her sweet appearance paired with a busy shopping center as the reason she’s become so popular.
Animal Control officers make regular stops to check up on the dog and attempt to capture her.
Capt. Scott Bates drives by practically every morning, often bringing some of his dogs’ treats. She won’t take the bait. In fact, the dog often turns her nose up at Bates’ dog bones. He said other visitors feed the pup more tantalizing morsels.
Hamburgers and table scraps may be why the animal isn’t interested in the dog food put in traps by Animal Control.
“It’s definitely not going to go in a trap when it’s getting sausage biscuits from Bojangles’,” said Rhyne.
The animal lives back in the woods that border I-85. Officers can’t easily chase the dog into the thicket of kudzu and briars.
“This dog is very crafty,” said Rhyne. “It’s hard for us to chase a dog that’s only a few inches tall.”

Read much more on this story at The Gaston Gazette.
Posted by Rowdy and Bette at 9:15 AM

Isn't her human interested in her? Why did she "escape" from said human. Oh the details...

I find that strange, too.. It could be, though, that her person was just passing through on I-85. Still if iI'd lost my dachsie,44 I wouldn't leave until we were reunited.

Trinket would like for that sweet girl to know that being rescued is great! Don't run so fast so that you can go to a forever home!

This is a very sad story because it is completely unnatural for a dog to choose to live alone. They are pack animals and find safety in a group or family. She may have been abused and finds this option better than where she was before. Very worried about her with winter coming. Surely someone can catch her before she is run over or attacked by a larger predator??