Dachshunds in Pop Culture: Will Joyce MacKenzie Give Up Her Black Velvet? 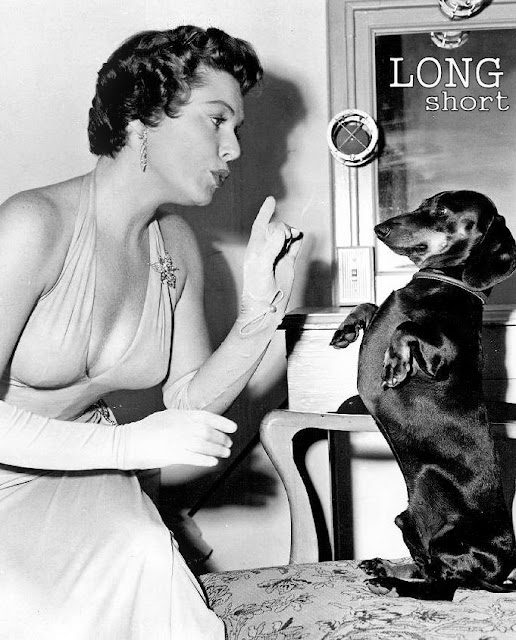 Who's a Handsome Boy?

Huh?  Joyce MacKenzie (born October 13, 1929 in Redwood City, California) is an American actress who appeared in films and television from 1946 to 1961. She is best remembered for being the eleventh actress to portray Jane. She played the role opposite Lex Barker's Tarzan in 1953's Tarzan and the She-Devil.
And oh yeah, she was a Dachshund Lover - sort of.  In this press photo and release from July 28, 1953, Ms. MacKenzie is struggling with giving up her Dachshund.  How could you say 'Bye" to those eyes?

FOR IMMEDIATE RELEASE:  A SWITCH ON "LOVE ME, LOVE MY DOG" -- HOLLYWOOD, CALIFORNIA -- "BLACK VELVET" PET DACHSHUND OF ACTRESS JOYCE MACKENZIE PUTS ON HIS MOST APPEALING MANNERS HERE, BUT TO NO AVAIL.  THE POOCH IS ON THE LOSING END OF THE "LOVE ME, LOVE MY DOG" PROBLEM.  MISS MACKENZIE, RECENT BRIDE OF SOCIALLY PROMINENT TIM LEIMERT IS LOOKING FOR  A NEW HOME FOR "VELVET" AFTER SHE DISCOVERED THE POOCH WOULD HAVE NO PART OF EITHER HER BRIDEGROOM OR THE BRIDEGROOM'S COCKER SPANIEL.  SO IT'S A NEW HEADQUARTERS FOR VELVET.

Apparently Black Velvet had good reason to be suspicious, as the MacKenzie-Leimert marriage would last only a few years - proving once again that Dachshund knows best. 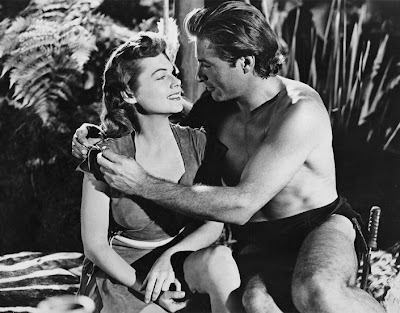 Joyce MacKenzie and Lex Barker
Posted by Rowdy and Bette at 7:58 AM

The dog was there first!