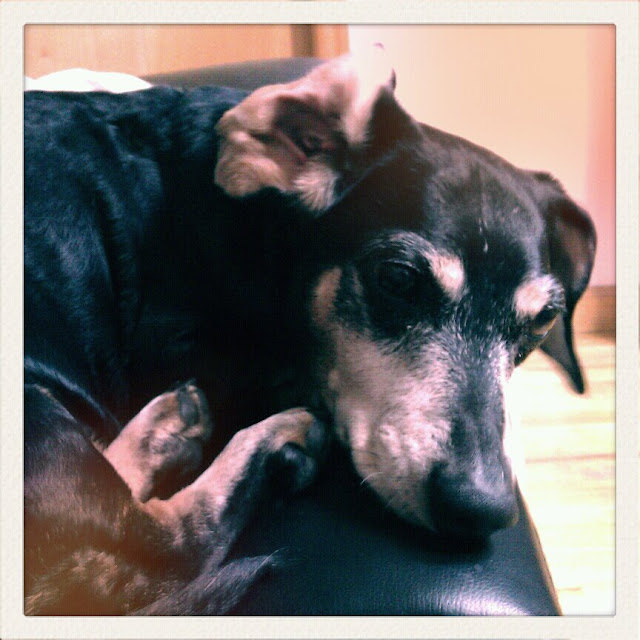 Deep Thoughts
Thanks so much to Stephanie Rand for writing in with the tale of her beloved handsome 'Charlie.'  Boy was he lucky to find such a wonderful home with his new human.  She writes:
Dear Joey and Rowdy,
First welcome Rowdy! You're adorable and I look forward to getting to
meet you and see you grow-up with your new pal Joey.
I have been reading your blog on a daily basis since adopting Charlie,
my older rescue Dachshund, on December 4th of last year.
I was thinking of adopting a dog for about a year prior to finding
Charlie - I did my research and found him on Petfinder. A lady - who
usually rescues cats - was forwarded an email saying Charlie was going
to be euthanized by the end of the day. She rescued him immediately
and then, after making sure he was socially adjusted, put a listing
for him on Petfinder. I was the first person to reply to her ad and I
met him a day later and then he moved into my home.

When Charlie first entered my apartment - after sniffing out the place
- he stood in the middle of the kitchen and peed while smiling and
looking right at me. It was as if he claimed territory to my apartment
- I loved his spark of personality from the start. I had been living
alone for about a year after a long-term relationship break-up. I
can't begin to express how much laughter and fun the little guy has
brought into my life on a daily basis. I like to take him to work from
time to time, we've gone to both Dachshund gatherings at Washington
Square Park and he has made some new friends on my block as well.

This summer my apartment was broken into and Charlie happened to be
home at the time. He wasn't hurt but he has stepped up his growling
and barking when he hears any noises in the hallway to make sure we
both remain safe. He has also become an extended member of my family -
this summer I took him up to Vermont to spend a week in a cabin on a
lake with my Dad and sister. He went in the lake for a swim and really
enjoyed all the new sniffs and life in the woods. He loves to visit my
Dad's house and run around the yard and take naps with his granddogdad
on the couch. 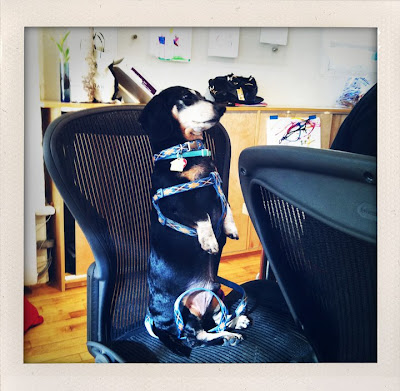 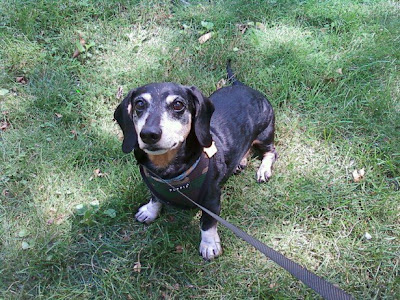 Baron and I love you Charlie and your "Mom" for giving your a wonderful home!

Cute story, thanks for sharing. Charlie is adorable and lucky to have found a loving home. 4 dachies from Quebec. Woof.

What a beautiful boy Charlie is!! How lucky for him to find such a loving Mom, and how blessed his Mom is, as is obvious by her story. May they have a good, long life together, with many happy times and good memories to cherish. Kindly, Jayne and Annie

We love the senior doxies! Charlie sounds like a doll. Bless Mom's heart for thinking the peeing-in-the-middle-of-the-kitchen exploit is an adorable way to baptize the new abode...LOL. Christa, Bruno, Olga, and Latka

Congratulations, Charlie. You certainly hit the new mommy jackpot! God bless all of those who go into shelters and save these babies, and those who provide them new homes.

Loved your story as it hits home. We live in Quebec Canada and I have 4 rescued dachshunds too. Last year my vet called and asked me if I would take a 8 yr old female dachie called Kelly as her beloved mom was dying and the husband did not want Kelly. He couldn't even wait till his wife was gone. Kelly was to be uthenized there and then. Having 5 pets and over the by-law limit (I have a cat too) and another pet would put me living in the dog house eating hot dogs (no pun intended), I could not take Kelly but had retired people I know looking for exactly a dog like Kelly so the husband surendered her to my vet and I picked her up and delivered her the next day to new home. Kelly went from death row to becoming once again a beloved pet and is now called "Princess" Kelly.

All these pups thank us in their own way by giving us tons of love every day for saving their life, as they are all so precious. Thanks for listening to my story similar to little Charlies.

Agreed. Charlie did hit the new mommy jackpot!! I love seniors (as mine are) and think they have sooo much to give!! we are the lucky ones.
:)
-Roxie Lou, Coco Beane and Annie Em