Dachshunds in Politics: Westminster Dog of the Year Contest 2011 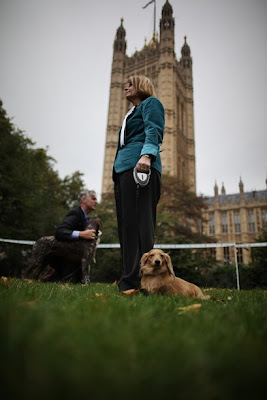 The 2011 Westminster Dog of The Year competition took place in Victoria Tower Gardens on October 13, 2011 in London, England. The annual competition was won by Conservative MP for Tiiverton and Honiton Neil Parish with his Labrador 'Wilberforce,' who was among the 15 Conservative MPs to enter versus only two Labour MP entrants.  Politics may be a dog-eat-dog world, but for one day at least, the dogs were cute and cuddly.  Above, Harriett Baldwin MP stands in sight of Parliament with her English Cream Dachshund 'Poppy' during the competition.  Source.
Posted by Rowdy and Bette at 9:03 AM