Get This Monkey Off My Back 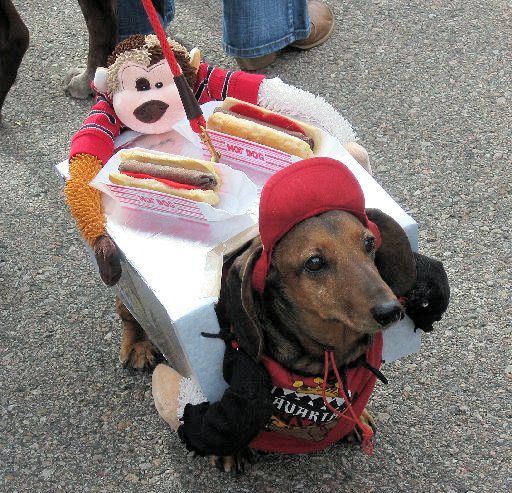 Congratulations to 10-year-old 'Cody,' who hails from Loveland, Colorado for taking first prize in the costume contest hosted by Dog Owner's General Store yesterday.  Via The Reporter Herald:

Wearing a T-shirt and cap that would make most dogs squirm, Cody strutted in front of the judges with a box carrying faux hot dogs on his back pushed by a stuffed monkey in a costume that played on his breed's nickname, "wiener dog."
Human Ken Ferguson has been dressing Cody in Halloween costumes for about seven years and said he always manages to think of something unique and different. It can be both fun and rewarding -- Cody took home a D.O.G.S. gift card on Sunday, and in past Halloween costume contests he has won a Wii game set (he lets his family use it, too).

Congrats to Cody & Ken! What a clever costume!