CBS Atlanta 46 A 1-year-old Dachshund was dropped off at animal control in Clayton County, Georgia last Wednesday after being discovered with wounds from an attack by someone with a paintball gun and a BB gun. According to CBS Atlanta, Bonnie Adams with Partners4Pets took the puppy to a veterinarian, who diagnosed him with a poison-infected wound from a paintball gun and six wounds from a BB gun. The pup's brother was also attacked and sustained cuts or tears to his ears.  Here's an excerpt from the story:

Investigators with Clayton County Animal Control are working on leads in the case of animal cruelty against two dachshunds.

Bullet, a barely 1-year-old puppy, was dropped off at animal control on Wednesday, along with his brother Pistol.
Someone shot Bullet at close range with a paintball gun and a BB gun.
It's a case of animal cruelty that could have cost Bullet his life if Bonnie Adams with Partner4Pets hadn't stepped in.
The nonprofit group took the dog to the Union City Veterinary Clinic for emergency surgery.
"Generally if we're not here, animal control would have to call a vet in to euthanize the dog because they don't want a dog sitting in the back suffering," said Adams.
The vet told CBS Atlanta News Bullet was dangerously infected with poison from the paintball attack when he arrived on Wednesday. He also had six small wounds from a BB gun.
Tubes were inserted into his hip area to help with drainage.
Pistol wasn't shot but he was abused. He appeared to have cuts or tears to his ears and needed medical attention.
If you have any information about the abused dogs, you are urged to contact Clayton County Animal Control.  The Atlanta Humane Society announced Sunday it is offering a $5,000 reward for information leading to an arrest and conviction of the person or persons responsible.  PETA announced yesterday that it has added $2,500 to that amount.
We certainly hope and pray that Bullet and Pistol make a complete recovery and find the loving homes that they deserve. 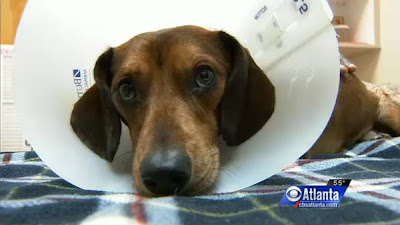 Bullet
Posted by Rowdy and Bette at 8:18 AM

Whoever would do such a thing to little dachshunds should have the tables turned on them.Its just sickening.

That is just so DISGUSTING.

That's sooo sad I hope they find whoever is responsible...I wish I could adopt pisto...my daple. Daschunds looks just like him and I adopted her fom clayton animal shelter...wish them lots of luck and prayers