A Note From Joey and Maggie 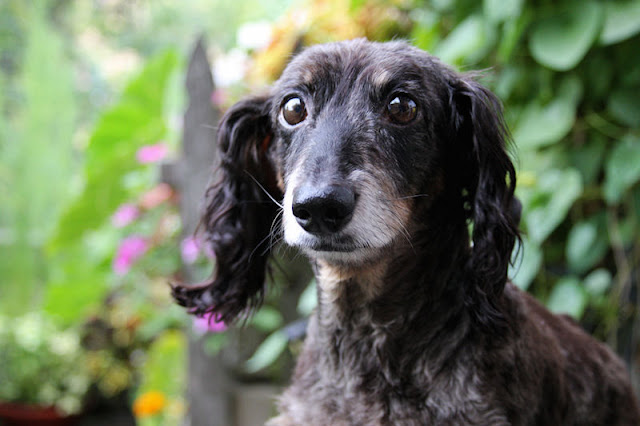 Maggie, September 9th, 2011
Your Long and Short of it All hostess 'Maggie' is in the hospital again, took her in yesterday morning.  Her appetite has been decreasing for several months, she often won't eat a meal, or will eat just half a meal; she is fed twice a day.  The last few weeks have been worse, she will skip a meal, and then hardly eat any of the next meal, but then sometimes she would eat a whole meal.  She didn't eat anything at all Wednesday or Thursday - her raw meat, tried plain raw turkey from the grocery store which she likes, tried cooking it, and that seemed to help, and then added some cooked fat free eggs, and she would like that, but only maybe 5 or 6 very small bites - and chewing it instead of gulping it.  Even tried kibble and canned dog food - she wouldn't touch it.
With her Cushing's disease, you would think that maybe she is being overdosed on her meds, which would cause her to not be hungry, but she was also drinking lots of water the last week like a Cushing's dog would do, and even had a few accidents in the house because of it, which is totally not like her.
So took her in for an ACTH stimulation test to see where her levels are for Cushing's, and also a blood panel.  It turns out that her pancreatitis is back, which Cushing's predisposes her to.  This is bad news because now it seems that her pancreas is becoming a chronic issue. Her diet hasn't varied at all, she gets her low-fat raw food, and low-fat snacks, that's all.
Not sure how long she'll be in the hospital - her amylase and lipase values are very high, and the vet usually keeps pancreatitis cases in for 4 days with no food, just IV hydration, to let the pancreas rest and hopefully get better.  She was drinking water at home this week though, so maybe she can come home early since she was doing that, and continue her on the no-food for a few more days and then look at her amylase and lipase values again.  Will know more by tomorrow probably.
Her pancreas simply must get better.  Damn Cushing's Disease. 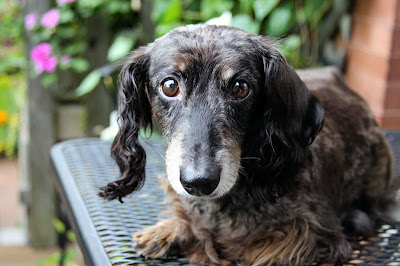 Oh, poor baby girl. I will be thinking about her and praying for a quick recovery. Sophie, Dora and Bailey send their love too!

Poor, sweet Maggie! Milo and I will keep her in our prayers for a speedy recovery!

Oscar and Hans are pulling for you and sending PAWS-itive energy your way for a quick recovery! Get better soon!

Get well soon Maggie! I had pancreatitis too when my gallbladder had to get removed and that is exactly what they did with me - no food or liquids (just IV) until it calmed back down. Poor baby.

Feel better soon, Maggie. You sure are tough!

Hang in there Maggie!

Oh Maggie May you simply must get better! We were worried when we saw that you wouldn't be going to the dachsie fest this weekend.
Hang in there, Joey and Carson, with all this good energy flowing to her, dear Maggie should get better soon.
Lots of love,
Melinda and Teagan

You're in our prayers for a speedy recovery. Best wishes.

I'll be thinking of you, Maggie, and pulling for you to beat this damn thing.

Thinking of you and Maggie and sending white light and best wishes for a quick recovery. As a human I have battled stomach problems so I can relate to poor Maggie. Rest and a break from food should do the trick. Keep up the positive energy and trust the process. Maggie is lucky to be so loved.

our thoughts and prayers are with maggie. love the mees doxies: (schnitzel; winfred; wilbur)

Basil and I are sending Long Dog Love to you all right now - as well as prayers and healing energy for Maggie. <3

Get well, little one!
Lots of love, hugs and kisses!
Poland crew

aawww! best regards and get well soon Maggie! hey i have some news from hawaii about a puppy mill case but dont want to share until the verdict on monday. will let you know info soon....let us pray for a good outcome monday...aloha sheree, ruby, nickel, pretzel, cadbury & godiva.

I am so sorry to hear about Maggie, Carson, and understand what you're going through with that "damn Cushing's Disease." Sawyer had an ATCH stimulation test yesterday to see if he is on the right dose of Vetoryl, for which he has displayed no marked difference in his behavior. I was hoping for that youthful spark that everyone promised me when Sawyer started that medication, but it hasn't happened so far. The results will be in on Monday. He hasn't had any pancreatitis episodes yet if appetite is an indicator, maybe because he is newly diagnosed, but it is good that you made me aware of what the future will hold for him. And, like you with Maggie, my fight for Sawyer will continue!

Oh Maggie MAggie I cry for you. Carson be strong. Lots of love coming your way.

Prayers that Maggie feels better soon. Hugs for you too dad. Hang in there

Hope you are better soon Maggie!

Poor little sweet Maggie - we hope you are soon feeling much better. We are so sorry to hear you are not well and have not been for a while. Please know that you are all in our prayers - Maggie, Carson and Joey - and that we will anxiously await your next update. May God Bless you and keep you and bring you much comfort. Love, Jayne and Annie

Maggie, So sad to hear that you are not well you beautiful girl. Praying and hoping so hard for you return to good health and enjoying that great food Dad Carson prepares. Carson and Joey stay strong and positive for your wonderful girl. Dcahsiefest was an excellent event, but not the same without Carson and his two beautiful dogs there,
John & Ozzie

:( how sad!!! I'm a doxie mama and I can't imagine whwat you must be feeling! I've never even heard of cushings before, is it common to the breed?? I hope she gets to go home soon!! <3

Very sorry to hear this news, will be keeping positive thoughts and prayers for Maggie. Hugs for all of you......

Maggie, you're in our thoughts & prayers <3 Trixie & Maeby

Prayers and fast healing go out to you Maggie. Your in our hearts!!

Maggie, feel better soon. You've got to look after your guys at home.

Barney and I send hugs and kisses to all of you. Karen & Barney dog

Sending three wagging tails your way.... came here for an update so maybe no news is good news.

We are so sorry to hear that sweet Maggie is having to endure pancreatitis again, we are sending prayers and good thoughts to all of you from another beautiful Maggie, Frankie and Linda

Lots of love and wags from the Herd in Baltimore and a big sloppy wet kiss from Auntie Keren!

Love is somthing that can not be explained – the force that drives us to protect the ones we care about.
Quotes on love