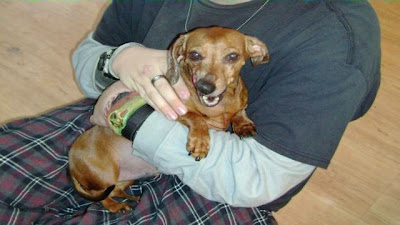 Here's a feel-good story to jump-start your Monday:  We're sure you remember reading about SSgt. John Mathatas, who was coming home to Brunswick, Ohio from the Middle East, but his Dachshund 'Drew' had just gone missing, and his family was trying to locate him before the veteran arrived.  Well, better late than never, because Drew was returned to the family on Friday!  Excerpt from newsnet5:

Right before an area soldier was set to return, his best friend went missing. Now, weeks, later, Staff. Sgt. John Mathatas’s dog has been returned.
Mathatas’s parents were watching Drew, an 8-year-old miniature dachshund, while their son was in Kuwait. They let the dog outside of their Brunswick home on March 12 and he never came back.
"Eleven years in the Army, he's got a lot of friends all over the world, but Drew is his best friend," Marta Mathatas, John’s mother, said on March 18. Drew had been by John’s side through several deployments and even divorce.
John Mathatas returned from duty on March 19 and on Friday, he was finally reunited with his pet pooch.
Marta Mathatas said a Parma couple had found the dog while out driving and had been taking care of the dog ever since. When they saw an article, they called Brunswick police. The dog was returned to the Mathatas family early Friday evening.

Welcome Home Drew!
Posted by Rowdy and Bette at 8:50 AM

Cannot think of a better welcome-home gift than the safe return of his little buddy!! Prayers were answered. Kindly, Jayne and Annie

So happy Drew and the SSGT have been reunited and thanks to those who found him and took care of him and returned him to his human!eus

I'm glad that they are back together!