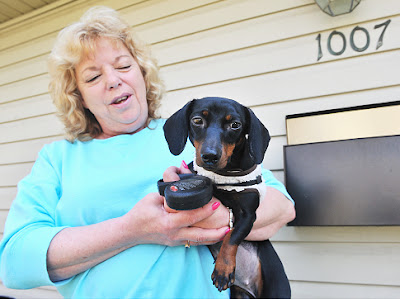 If you love hot drama, you'll love this story.  Us?  Not so much - the only party hurt here is the Dachshund.  Meet Long Island, New Yorker Barbara Bottiglieri with her cute little black and tan smooth, 'Coco.'  Ms. Bottiglieri was walking Coco on Saturday when her neighbor Jaime Sanchez, who lives across the street, warned her to not let her dog doody on his grass, or he would sic his 50 pound dog on both of them.  Excerpt from the New York Daily News:
"She's constantly letting her dog defecate and urinate on our property," said Sanchez's wife, Antoinette, noting that there's been a bitter feud between the neighbors for two years over parking on the street.
But when Bottiglieri threatened to call police, Sanchez walked up to the woman, snatched the leash and flung the pup 6 feet in the air - and 10 feet into the middle of the street, cops said.
The landing caused injuries to the dog's tail and ruptured stitches on her belly from being spayed recently, cops and neighbors said.
Cops soon arrived and cuffed Sanchez. He was charged with torturing animals and reckless endangerment to property.
"I'm horrified by it," said a neighbor. "You're not a man when you confront a woman and toss a dog into the air."
Sanchez's frustrated wife said Bottiglieri let the injured pup pee on her lawn just hours later.
"I can't believe she had the audacity to do this," she said.
Meanwhile, in a follow-up article in the New York Daily News:
The Long Island woman whose mini-wiener dog was hurled into the street by a lawn-defending neighbor claims he must have been suffering from a bad case of dog-poo paranoia.
Barbara Bottiglieri said she doesn't let her miniature dachshund, Coco, poop on anyone's lawn - despite Jaime Sanchez's claim her pooch previously did just that.
"He said, 'Hey, you! I don't want your dog walking on my property!'" Bottiglieri recalled. "I said, 'What are you talking about? I have manners; my dog didn't do anything on your property.'"
She said she tried to reason with Sanchez, 56, but her Franklin Square neighbor threatened to unleash his German shepherd-sized mutt on her.
"I guess because he wasn't getting anywhere with me - I was being polite - he took it out on the dog," Bottiglieri, 54, said.
"He flung her into the air," she said. "That vision will stick in my head for the rest of my life."
CBS2 New York interviewed some neighbors who supported Mr. Sanchez:
At least two neighbors said that Bottiglieri has been told before by many in the area to keep Coco off their lawns.
“The dog does go all over the place,” one woman said. “She walks the dog on our property, on the grass and he’s [Sanchez] not the bad guy here.”
“The woman was told not to walk the dog in front of a lot of the houses in the neighborhood,” one man said. “The woman walks the dog and she actually smokes a cigarette and lets the dog do whatever it wants.” 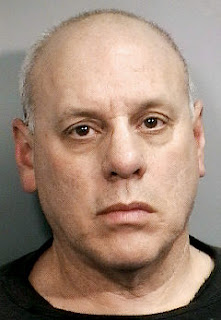 Moral of the story:  Don't be a crazy jerk and take out your anger on a defenseless little dog.  And pick up your dog's doody.  We'll file this one under Hot Mess.
Posted by Rowdy and Bette at 9:15 AM

Shameful; in my opinion that man should spend the rest of his life in jail!

So, where exactly are people who live in towns supposed to walk their dogs nowadays?

Considering the entire post, both parties (excluding Coco, of course)are at fault - the guy for misdirecting his anger and outright cruelty at the puppy - and not throwing the woman in the street, instead- AND the woman for disregarding her neighbors wishes to not let her dog on their lawns (sounds like it wasn't just him with this concern).
As with many things, the "bad apples" always seem to spoil the bunch.

I had one such incident where my dog did nothing but walk on the grass and I gladly faced down the angry party nose to nose. He went back inside. John & Ozzie

A follow up I now try to keep my dog on the sidewalk, not to placate the lawn people but to keep him from being exposed to the poisons that are used to beautify their lawns. P.S. He eliminates in our yard before and after walks which are for exercise but this means nothing to lawn people on the lookout. This was what i explained in an agitated tone to the previously referenced complainant. John & Ozzie

That is definitely a hot mess! I'm a pacifist so I'm staying out of it...except to say I don't care what someone's dog has done you don't fling the dog into the street! Even out in rural America there are doggie issues...one of my neighbors would let their two laboradors out when they arrived home from work...the labs would come to my house to poop! Doesn't matter where you live this happens all over!

I have the unfortunate bad luck of living here on Long Island and to be 100% blunt and truthful this whole island seems to be full of nothing but white trash morons who over pay for garbage houses and they are OBSESSED with their lawns. They have nothing better to do with their lives but live in their windows and watch grass grow LMAO! These people love to be in their neighbors business 24/7. There is no pleasing these self-centered trashy people. I got a laugh over having this confirmed yet again by the mention of the "street parking issue" ! Ha! Unreal. I cannot wait to move away from people so self-centered and low class that they band together to defend animal abuse over a lawn. SHAME ON YOU ! I have 3 dachshunds and do live rather close to this town and the local news made the mistake of broadcasting the block this occurred on...looking forward to walking my dogs in front of this animal abusers house with my rather large and built fiance, I'd like to see them attempt to throw us in the street! 0:-) Long Island is a pitiful place, soooooo happy I am moving next year ! Everyone out of state is so much nicer and people actually respect other people so much more, living here is like being spit on everyday. No one cares about one another, they are all out for themselves. I hope that poor dachshund doesn't have future back problems resulting from this horrific abuse by a monsterous psychopath. I hope that woman sues the you know what out of him !!!! <3

There was a case similar to that here in Washington too. There was a case of road rage and to express his anger a guy snatched a woman's little dog out of the car and threw it onto the highway. Unforgivable.

This is just awful! How could someone do that?! It's just poop! It's not gonna kill your lawn! Granted, the lady should have been picking it up...but it is still NO EXCUSE for harming the poor defenseless bebe!