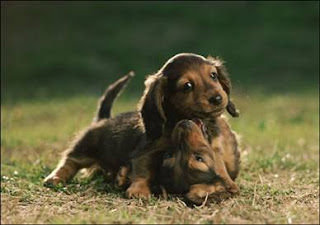 She's the Boss
A new study in the news at The Discovery Channel reveals what some dachshund and dog owners have known all along: in puppy play, it's ladies first. Even if the male has a physical advantage, young male dogs playing with female dogs will often let the female win. Here's an excerpt: Male dogs sometimes place themselves in potentially disadvantageous positions that could make them more vulnerable to attack, and researchers suspect the opportunity to play may be more important to them than winning.
"We found that self-handicapping tends to occur in conjunction with play bows," lead author Camille Ward told Discovery News.
"A play bow is a signal that dogs use when they want to communicate playful intentions to a potential play partner," added Ward, a lecturer in the Department of Psychology at the University of Michigan and director of About Dogs LLC. She is also author of the forthcoming book, 'Relationship-Based Dog Training.'
While males were less likely to initiate play with other males, they seemed eager to play with females, and would go to all sorts of lengths to keep the play going.
They might lose the game in the short run, but they could win at love in the future.
Read all about it The Discovery Channel.
Posted by Rowdy and Bette at 6:14 AM