Dachshund Fed LSD by Naked Couple is Hit by Car 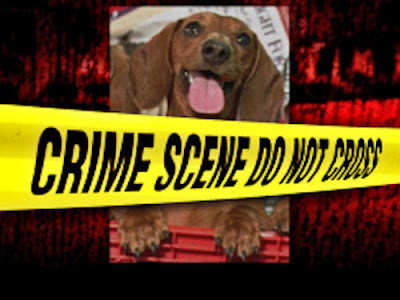 In the News We Don't Like to Report Department, a Dachshund named 'Oscar' who hailed from Snellville, Georgia, has met his fate after his naked humans fed him LSD that was placed into a gummy worm.  You can't make this stuff up, which is why this story has gone viral:
A dog was hit by a car Sunday night after its owners gave it a gummy worm laced with LSD, police said.
Snellville police Capt. Harold Thomas said Monday that officers initially responded to the Pinehurst Road home of Nicholas Modrich and Jamie Hughes at about 8 p.m. after neighbors reported seeing the couple running down the street naked.
When police arrived, Modrich and Hughes opened the door and were "obviously on something," Thomas said. Modrich was wearing nothing but socks and Hughes was topless as they told police they had given LSD to "Oscar" and he was missing.
Oscar turned out to be their daschund.
Officers quickly learned that Oscar had been struck by car on a nearby street when Modrich's mother and younger brother showed up at the scene. The dog, whose condition was unclear Monday, was taken by Gwinnett County Animal Control after it bit them.
The suspects will likely face drug charges and officials are weighing reckless conduct and animal cruelty charges, Thomas said.
"I've been doing this for 31 years," Thomas said. "This is a first."

Initial reports indicated that Oscar was taken for follow-up veterinary care and was recovering, but reports today indicate that he has been euthanized.
Posted by Rowdy and Bette at 8:55 AM

How mean and stupid to do that to a little dog. It breaks my heart reading about it. If Oscar was euthenized may he RIP. I hope this couple never gets another pet to torment. Shilo, Maggie, Sass and Skyla's mom Patricia from Quebec, Canada.

Absolutely heart breaking. Why they will give animals to just anyone ill never know.

That breaks my heart! So sad :( I can't believe how cruel some people can be.

Those people should never be allowed to own an animal ever again.
I hope this haunts their consciences for the rest of their lives.

Was Oscar euthanized because he bit the animal control officers, or because the injury, from being run over, was too great? Point being, I would hope that animal control differentiated between knowing that dogs do bite from being frightened and in pain rather than being "vicious". As for his "owners", what a couple of idiots.

Poor Oscar. =.( I hope his days at the Bridge have been fun and peaceful and full of love.

And I hope those two burn in hell.

I hope they burn in hell. It's disgusting the kind of people allowed to live in this world. Just sickening

I read that the police was taking blood tests from Oscar to lay drug charges on the couple. I sure hope they did not euthenize him for that reason, but I got a bad feeling about it.

Wow, just wow. Reading a story like this just triggers so many emotions. Rest in peace Oscar. Recreational drugs such as LSD have their place, in a controlled set and setting, with a sober sitter with you always. Oscar could not possibly have known what was happening to him. He must have been so scared.

This story makes me hate people. Feeding drugs to animals is completely reckless and hurtful behavior. The only good thing out of this is that this poor dog isn't going to be tormented by his irresponsible owners anymore.

Cheryl Hanna reported for the Examiner that Oscar died from injuries. To make the story just that more sad is that the couple had "adopted" Oscar from the local shelter.

I wish the couple would be euthanized