Brave Dachshund Sacrifices Himself For His Humans


We're not quite sure what to say about this story except that the phrase "Bold to the Point of Brashness" certainly defines this Michigan Dachshund named 'Bradley,' who fearlessly gave his life for his humans when a bear approached them. Via 9and10 News:

A dog being called a hero tonight, credited with saving the lives of two men when they were caught off guard by a bear. Bradley, a Dachshund, put up a fight against the bear on Saturday in Oscoda County.
While he didn't survive, the two men who were with him say because of him they did. The two men from downstate were visiting their friend in Comins. They say despite the large bear being feet away from them, it didn't scare the small dog one bit. "We came out in the golf cart, and this bear was standing right there," Mike Hodges recounts.
Hodges, who suffered a stroke just three weeks ago, says he and his friend Jeremy, didn't notice the bear right away. Bradley's owner, says the dog certainly did. "Bradley jumped off the golf cart and attacked the bear, and the bear grabbed Brad and took off," owner John Force explains. "He grabbed him up and took off running through the woods with two other bears following 'em," describes Mike.
They believe the bear was startled by Mike, Jeremy, and Bradley, and was trying to protect it's cubs, and when the bear reacted, Bradley was simply trying to protect the two men he had only just met that day.
"I think when Brad saw it, he did what he would normally do, jumped right off it and went at it. I wouldn't have ran after that bear with a knife as big as I am, and little Brad- 4, 5 pounds- he don't have a filter for fear," John says.
The two men eventually scared the bear away with a stick and loud noises. They brought Bradley back to the house, and the dog was rushed to an animal hospital, where he died. "He was a warrior," John speaks highly of his dog, "if he would have died any other way than that, you know, it was a noble death the way I look at it."
John believes his dog's fearlessness changed the outcome of what could have been an even more tragic situation. "Mike being in the medical condition he's in, I don't think he would have been alert enough to get away from the bear. I think Brad did save them from getting mauled at least," says John.
John says he and his family are proud of what their dog did, and know Bradley would do it again. "It ain't the size of the dog in the fight, but the fight in the dog that counts, and that sums it up for Bradley." 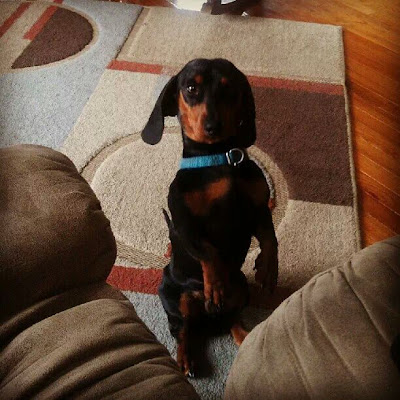 He was Handsome.  He was Bradley.
Posted by Rowdy and Bette at 8:43 AM

Bradley had a small body but a mighty heart. What a hero!

Bradley you are one of the bravest dogs I've ever heard about. It's why we all love Dachshunds - big heart, loyal to a fault and that torpedo sense of "I will win!" Our hearts go out to your family who must miss you so.
All the best,
Eliza57 & Hope

Hey y'all! Love this page! I saw you said something about Austin in one of the postings and can't find it...anyway,

we just held the FIRST ANNUAL WEENIE DOG SWIM MEETa few weeks back. We made shark fins and everything!

Here is the trailer! :) ENJOY
http://www.youtube.com/watch?v=2e-gBrgtc6k

What a brave little guy. RIP Brad you had a big heart and a brave soul.

Omg, I am in tears right now!!! What an amazing and courageous best friend!!! Poor Bradley and his family, I wish you all the best and know that Bradley is looking down on you in doggie heaven looking out for you still!

Rest in peace my friend.